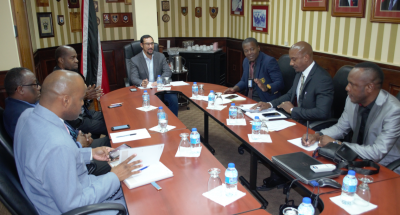 The meeting which lasted for about an hour was a productive one with discussions surrounding a number of matters affecting the Trinidad and Tobago Police Service (TTPS) and its Officers.

Minister Young took the opportunity to thank the members of the TTPSSWA for their service to the men and women of the Trinidad and Tobago Police Service. He then addressed the issues raised by the officers, which he described as matters that were pertinent to the smooth running of the Police Service.

The Minister indicated that the other agencies of the Ministry of National Security will continue to work together with the TTPS, to ensure the safety and security of the citizens of Trinidad and Tobago.

Minister Young informed the Association, that he looked forward to working together to achieve the goals set out in the meeting, to assist the Police Service.