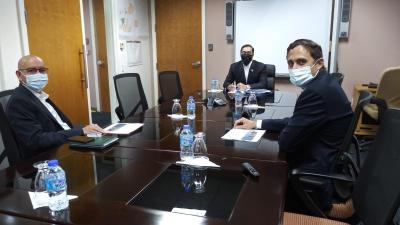 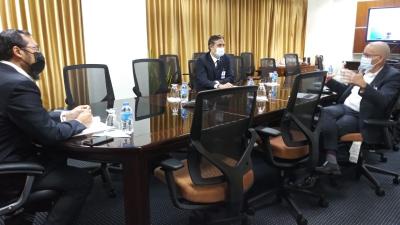 The Minister of Energy and Energy Industries and Minister in the Office of the Prime Minister, the Honourable Stuart R. Young, M.P., held a meeting with BHPTT Executives, Vincent Pereira outgoing Country Manager, and Michael Stone, incoming Country Managertoday (Tuesday 4th May 2021) to discuss BHP’s operations in Trinidad and Tobago, including the on-going transition from Mr. Pereira to Mr. Stone at the helm of BHP’s Trinidad and Tobago operations.

BHPTT took the opportunity to inform Minister Young that first oil production was realized today from the Ruby Field, ahead of schedule which was encouraging news.

The Ruby Field is part of the Ruby-Delaware Field Development in Block 3(a) which will produce oil and natural gas resources using six (6) development wells with peak production rates expected at 12,000 bopd and 80 mmscf/d of natural gas. All development wells are expected to be online at the start of Q3 2021.

The Minister congratulated BHPTT on their safe operations in these challenging times and discussed certain specific projects that he would like BHPTT to work on with the Government, designed to secure the future of the energy sector.

Following the meeting, both parties agreed to re-engage in short time to pursue detailed discussions on future BHPTT projects in Trinidad and Tobago.

The meeting was conducted under strict Covid19 protocols as listed by the World Health Organisation  and the Ministry of Health of the Government of the Republic of Trinidad and Tobago.