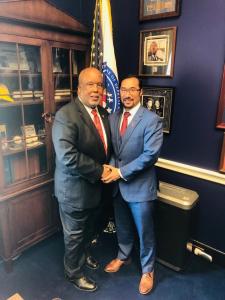 Minister of National Security the Honourable Stuart R. Young M.P., accompanied by Trinidad and Tobago’s Ambassador to the United States of America in Washington D.C., Brigadier General (Ret’d) Anthony Phillips-Spencer, and the Chief of Defence Staff, Air Commodore Darryl Daniel, attended meetings in Washington D.C., U.S.A. on Wednesday 15 May, 2019 and Thursday 16 May, 2019.

On May 15, 2019, the Trinidad and Tobago delegation, along with other ministerial and ambassadorial representatives of CARICOM, held meetings with Congresswoman Maxine Waters, Chairwoman of the House’s Financial Services Committee, Congressman Eliot Engel, Chairman of the House’s Foreign Affairs Committee and other members of this Committee, as well as Congressman Bennie Thompson, Chairman of the House’s Homeland Security Committee. At these meetings, a number of matters were discussed including security issues affecting the CARICOM region, financial matters (derisking and loss of correspondent banking) and disaster preparedness in the CARICOM region.

Trinidad and Tobago played a lead role in these meetings and assisted in articulating the region’s position on the topics discussed.

On May 16, 2019, Minister Young and other Ministers and Ambassadors from CARICOM engaged with various arms of the United States’ Government at the US State Department to have high level discussions on the Caribbean Basin Security Initiative Act, its use over the last ten (10) years since its conceptualisation and passage and its continuation when it expires in 2020.

Minister Young played a leading role on behalf of CARICOM in these discussions, co-chairing one of the plenary sessions on cyber-crime and countering violent extremism.

Trinidad and Tobago continues to play an important and leading role in CARICOM and in representing the region at international levels in many areas, including national and regional security.