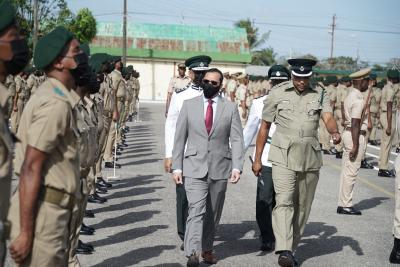 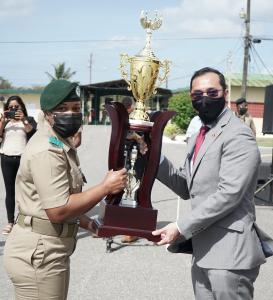 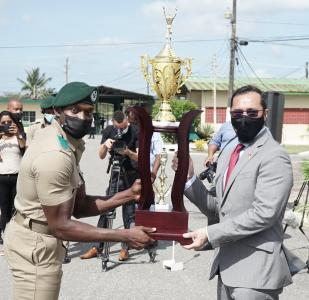 February 16, 2021, Port of Spain: Tasked with the strong mandate to protect society and prevent crime by facilitating the rehabilitation of offenders, two hundred and thirty-nine (239) prison officer recruits were inducted into the Trinidad and Tobago Prison Service today.

Delivering the feature address at the Passing Out Parade and Induction Ceremony held in honour of Batch #673, Minister of National Security the Honourable Stuart R. Young M.P. commended the newly inducted prison officers for choosing to enter into a career of service to country, especially in this challenging time of the COVID-19 global pandemic, and congratulated them on completing the rigorous training programme.

Outlining their essential role in national security, the Minister described the recruits as “guardians of the Prison Service, tasked with safeguarding society from within the prison system by overseeing the rehabilitation of offenders.” He encouraged them to wear their uniform with pride and honour and demonstrate the highest level of ethics and professionalism. He urged the recruits to at all times “act with integrity, demonstrate reliability, stay strong and resist any influence to engage in, facilitate, or participate in criminal activity.”

Minister Young acknowledged Prison Service instructors for their dedication in leading a comprehensive training programme and ensuring that the recruits are well prepared for the mental and physical demands of the job.

Reiterating his commitment to advance Prison Service Reform, the Minister stated his intention is to prioritize legislation to treat with the introduction of a system of Parole for Trinidad and Tobago. The Minister noted that critical pieces of legislation related to the Prison Service have already been passed in Parliament, including the Interception of Communications (Amendment) Bill 2020 which will allow for the interception and recording of communications from prison facilities and vehicles used to transport prisoners to be admissible as evidence in court proceedings. Also, consistent with a commitment made to the Prison Service upon the Minister’s assumption of office, the Miscellaneous Provisions (Law Enforcement Officers) Amendment Act, assented to in 2019, increases existing penalties and introduces new provisions with respect to offences committed by and against all law enforcement officers, including prison officers, in the execution of their duties.

Minister Young affirmed that he remains steadfast in ensuring the security of the members of the Prison Service and continues to promote an inter-agency approach to prison officer safety. He revealed that the Ministry of National Security is in the process of procuring additional quantities of firearms and stab-proof vests as part of the continued commitment to safeguard prison officers.

The Minister shared some infrastructural upgrades that are being undertaken at prison facilities, including the upgrade of the Alarm System at the Golden Grove Prison; the installation of Closed Circuit Television System (CCTV) at the Maximum Security Prison; as well as improving the plumbing and electrical system at Remand Yard.

The Minister also took the opportunity to commend the Commissioner of Prisons and all officers on all their efforts in relation to the management of COVID-19 at the nation’s prisons facilities.

The Passing Out and Induction Ceremony of Batch #673, was held today, Tuesday February 16, 2021 at the Golden Grove Prison in Arouca.