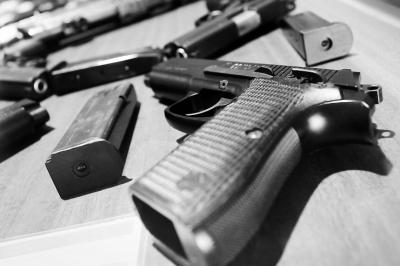 The Ministry of National Security is pushing for three pieces of “ground breaking” legislation aimed at reducing and eventually removing illegal firearms from Trinidad and Tobago.

“Let us take the fight to those who want to live a life of criminality and in particular who want to use the tool of illegal firearms to terrorize law abiding citizens,” said Minister of National Security Stuart Young earlier today, April 9 2019.

He said the high prevalence of illegal firearms presents a grave challenge to the security of all citizens.

Young said that almost every serious violent crime and the vast majority of murders were committed using illegal firearms. The purpose of this legislation, he said, is for the Government to send a strong signal to criminals.

T&T’s porous borders allowed for large caches of firearm to enter the country undetected but Minister Young assured that over the last few months law enforcement has been focussing on locking down the country’s borders in an effort to keep out illegal firearms. He argued that civic-minded citizens will agree that any criminal caught with a firearm should not be allowed bail.

The three pieces of legislation being proposed are:

1.No bail for one hundred and twenty days (120) days for persons found in possession of illegal firearms. During this time, the Trinidad and Tobago Police Service (TTPS) will work on the prosecution of these individuals.

2.The restructuring of the sentencing system for persons found guilty of possession of illegal firearms. A three-strike tiered and penalty system will be proposed for increased sentences, increased fines and increased penalties for repeat offenders.

3. The revocation of the bail of any person engaged in criminal activity while out on bail.

Discussions were held with the TTPS and other intelligence agencies for their input on the proposed legislation, the Minister said. Young said the Prime Minister has also given approval and the Attorney General will do the necessary drafting to take the legislation to Parliament.

Annually thousands of firearms and tens of thousands of illegal rounds of ammunition have been taken off the streets by the members of TTPS and the Defence Force.