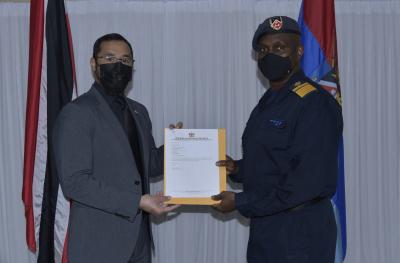 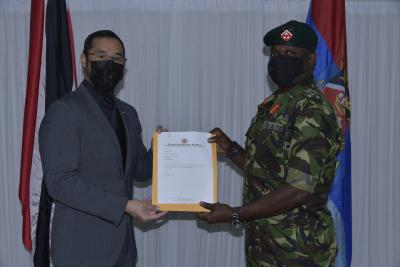 Port of Spain: Minister of National Security the Honourable Stuart R. Young M.P. presided over a historic ceremony today as two members of the Trinidad and Tobago Defence Force (TTDF), serving in leadership roles, received letters of promotion in ranks after being promoted by President of the Republic of Trinidad and Tobago Her Excellency Paula-Mae Weekes O.R.T.T.

Receiving his Instrument of Promotion today was Chief of Defence Staff Air Vice Marshall Darryl Daniel who was promoted from the rank of Air Commodore, effective November 01, 2020. He becomes this country’s first Air Vice Marshall.

Colonel Dexter L. Francis was promoted to the rank of Brigadier General and appointed Vice Chief of Defence Staff, effective November 01, 2020. Brigadier General Francis enlisted in the Trinidad and Tobago Regiment thirty-two (32) years ago and has served in various senior roles including Acting Commanding Officer of the Trinidad and Tobago Regiment and Chief Staff Officer since 2018.

Speaking on the occasion, Minister Young congratulated Vice Marshall Daniel and Brigadier General Francis on their promotion, which he said was well-deserved.

The Minister stated that “leadership comes with great responsibility and those holding such positions must protect the office they hold, at all times.” He reminded that “persons only hold an office temporarily; each leader must strive to take their institution to a higher level and leave it in a better state at the end of their tenure.” The Minister acknowledged that both Vice Marshall Daniel and Brigadier General Francis exemplify this type of leadership and thanked them for their service and dedication to duty.

Minister Young emphasized that “astute leadership is critical in treating with the challenges being experienced in Trinidad and Tobago.” He encouraged both gentlemen to “keep the Defence Force stable during these times” and assured them that “this country will remember them for their contribution to the nation.”