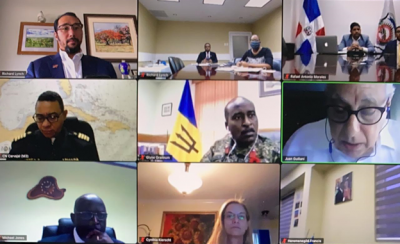 The Caribbean–US Security Cooperation Dialogue is an annual high-level meeting that provides the opportunity for Ministers from CARICOM, the Dominican Republic and representatives of the Government of the US to assess the objectives and accomplishments of the Caribbean Basin Security Initiative (CBSI). The CBSI, which was launched in May 2010, seeks to strengthen cooperation between the Caribbean (CARICOM and the Dominican Republic) and the US, to address crime and security.

At this year’s Dialogue, Minister Young delivered a presentation on the security challenges and emerging threats in the Caribbean. Other issues discussed included: Combatting Transnational Organized Crime, Maritime Law Enforcement and Youth Crime and Violence.

The Ministry of National Security was also represented at the Dialogue by the Chief of Defence Staff, Air Commodore Darryl Daniel and other officials of the General Administration Division. The US delegation was led by the Acting Assistant Secretary of State for Western Hemisphere Affairs, Ambassador Michael Kozak, and the Dominican Republic was represented by Ambassador to CARICOM, His Excellency Juan Guiliani Cury.