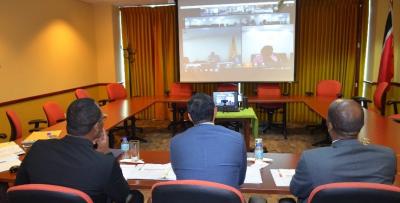 Port of Spain: Minister of National Security, the Honourable Stuart R. Young M.P. participated in the 21st Meeting of the Council for National Security and Law Enforcement (CONSLE), held via video conference on Wednesday 29 January, 2020.

The meeting was chaired by Dr. the Right Honourable Keith Mitchell, Prime Minister of Grenada and Chair of CONSLE, and was attended by Ministers with responsibility for National Security across CARICOM member states. Also present at the meeting was the Secretary General of the CARICOM Secretariat, Ambassador Irwin LaRocque.

Discussions centred on strengthening the cooperative framework for security in the Region, through the CARICOM Crime and Security Strategy, the signing of various memoranda of understanding, and the harmonization of policies and legislation. Discussions also focused on training and development aimed at evidence based decision-making and the regional response for mitigating potential threats.

The meeting ended with Member States reaffirming their commitment to maintaining regional security and an acknowledgement that the Chair of CONSLE would be presenting a report of the issues discussed at the Thirty-First Inter-Sessional Meeting of the Conference of Heads of Government, scheduled to be held in Barbados over the period February 18 – 19, 2020.