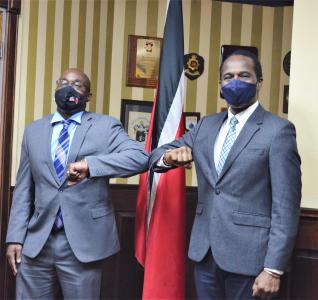 Port of Spain: Trinidad and Tobago’s security relations with the United States of America were reinforced today, Tuesday May 11, 2021, when Minister of National Security the Honourable Fitzgerald Hinds M.P. received a courtesy call from Chargé d’ Affaires of the Embassy of the United States of America Mr. Shante Moore. Minister Hinds welcomed the opportunity to meet with Chargé d’ Affaires Moore.

The Minister acknowledged Trinidad and Tobago’s longstanding, positive relationship with the United States and underscored the resolve of the Ministry of National Security to strengthen security cooperation and future collaboration in areas of both traditional and emerging mutual interest.

Both Minister Hinds and Chargé d’ Affaires Moore committed to continue working together to ensure the safety and security of all in Trinidad and Tobago.