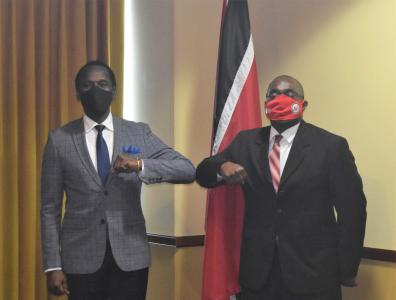 Port of Spain: The bilateral relationship between the Republic of Trinidad and Tobago and the United States of America was reinforced when the Minister of National Security, the Honourable Fitzgerald Hinds M.P., hosted a bilateral meeting today Friday July 23, 2021 with the Chargé d’Affaires of the Embassy of the United States of America Mr. Shante Moore and other U.S. Embassy officials.

Minister Hinds met with Mr. Moore and his team, to discuss the full range of bilateral security cooperation, which included the strengthening of law enforcement capacity, defence and military interoperability, Customs and Excise coordination, and information sharing.

The parties further affirmed continued bilateral cooperation for all matters of mutual security interest, between Trinidad and Tobago and the United States of America.