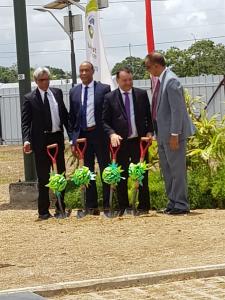 On May 1, 2019 Minister of Energy and Energy Industries Franklin Khan turned the sod for the NGC CNG/NPMC Flagship Service Station at Preysal Interchange, Couva. He gave the following address.

It is my great pleasure to be here today to address you all in turning the sod for the CNG Flagship Station, here at the Preysal Interchange, Couva. Today marks another significant achievement since the government approved the introduction of Compressed Natural Gas (CNG) as part of the transportation fuel mix in 1992.

The first CNG outlets were commissioned by the Trinidad and Tobago National Petroleum Company Limited (NPMC) and the programme was reactivated in 2008 when global demands for more ‘environmentally-friendly fuels’ and the reduction of carbon emissions became critical issues. The initiative was borne out of a partnership between NPMC and NGC.

As many of you would recognize, many fuel-dispensing stations are still located at their original sites. However, considering the demographic changes in terms of expanded road networks and growing residential and commercial clusters, there is a need to expand the existing CNG distribution network.

Ladies and gentlemen, the Government continues to work closely with public and private stakeholders focused on achieving national goals. In this path to success, we continue to take the necessary steps to facilitate the growth of the CNG refueling network of the country via new-to-industry, upgraded and retrofitted CNG fuel stations.

The Government had approved a number of fiscal incentives through the Finance Act No. 13 of 2010 that included CNG Fiscal Incentives, such as:
 Customs Duties, MVT and VAT removed on imported new and used (less than 4 years old) OEM natural gas vehicles with engine size not exceeding 1599cc for both public and commercial use;
 Removal of import duty on components for the retrofit of vehicles to use CNG;
 For non-business use: 25% tax credit for conversion cost up to a limit of $2,500 per vehicle;
 For business use: Capital uplift of 130% for wear and tear allowance on equipment used in the conversion of vehicles to run on CNG.

The overall CNG Programme would be implemented in two phases, estimated to cost a total of TT$2.07Bn. Of this total, TT$1.463Bn would be allocated for the conversion of 100,000 vehicles; TT$552Mn for the construction of seventy-two (72) CNG stations; and TT$55Mn for ancillary costs, which includes public education and marketing, provision of mobile CNG stations, expert and technical support and Radio Frequency Identification System.

In June 2013, Cabinet agreed to an investment of TT$500Mn by the NGC for the implementation of a (5) five-year plan for the development of CNG as a major vehicular fuel in Trinidad and Tobago (T&T).

In order to align the Government’s mandate and promote the prominent use of more efficient, cleaner fuels and to meet evolving global standards, a subsidiary company of NGC called NGC CNG Company Limited (NGC CNG) was established on September 3, 2013.

The TT$500Mn investment by NGC (both by itself and via its subsidiary NGC CNG) in Phase I of the Programme would entail the construction of approximately twenty-two (22) new CNG stations, the conversion of approximately 17,500 vehicles but this was revised to 19,000 as well as the undertaking of ancillary costs.

Additionally, in order to encourage early consumer buy-in, Cabinet agreed to the reduction in the retail price of CNG from $1.07 per litre gasoline equivalent (lge) to $1.00 per lge in 2014. This was referred to as ‘The Dollar Gas Concept’.

After five (5) years, the overall CNG programme has accrued benefit to the country via the reduction in the liquid fuel subsidy. With the imminent restart of the Pointe-a-Pierre refinery, CNG as a transportation fuel would continue to provide opportunity for increasing the receipt of foreign exchange earnings from the sale of displaced liquid fuels in regional and international markets, as well as significantly reducing emissions of carbon dioxide (CO2) as well as other pollutants from conventional transportation fuels.

In 2017, Cabinet agreed:
i. to the development of the NGC CNG Company Limited Flagship CNG station at the Preysal Roundabout that would dispense both CNG and liquid fuels, and include a convenience store at an estimated cost of TT$30Mn;
ii. that this station could be developed as a clean energy site that would include the use of solar energy applications;
iii. that NGC CNG conduct the necessary traffic management study to determine if other business elements can be accommodated on the site apart from the fuel station and convenience store, with due regard to the need to avoid impeding the flow of traffic around the site; and
iv. that funding of the said project be met by the NGC.

The Preysal flagship refueling station serves as an excellent addition to our country’s CNG refueling network. In total, there are now twelve (12) CNG locations that are ‘Open’: ten (10) CNG refueling stations available to the motoring public in T&T, with two (2) private stations available for the fleets of NGC and PTSC on their respective compounds. Additionally, there are nine (9) stations that are classed by NGC CNG as ‘In Progress’ and eight (8) stations that are classed as ‘Upcoming’. The Preysal Interchange flagship station is currently under the category ‘Upcoming’, but it will move into the category of ‘Open’ in short order.

NPMC, NGC and NGC CNG have worked well together on previous projects and will continue to do so in the construction activities and installations at this location. At Preysal, there is easy access for commuters traversing the Sir Solomon Hochoy Highway as well as addressing the needs of thousands of residents on both sides of the highway.

The fueling station represents the first part of the development work at the site and is expected to be completed later this year.

The design concept of this project was developed with the following objectives:
 A visitor centre that provides interactive information on the history and operations of the area and the Point Lisas Industrial Estate;
 Recreational opportunities for the community, estate employees and commuters through an open green space environment;
 A sustainable site that is aesthetically pleasing, comfortable and safe to use;
 Light retail/commercial facilities and public conveniences to enhance the attractiveness and utility of the facility and to create a source of income generation that would cover maintenance costs.

To ensure the Government continues to bring further comfort to the motoring public to make the switch to CNG as an alternative, low-price fuel of choice, the Ministry of Energy and Energy Industries has issued a total of three (3) CNG Service Licences (CSLs) to converters, in addition to two (2) conditional CSLs.

Another important early development was a partnership between NGC CNG and the National Energy Skills Centre (NESC) to offer specialised CNG Technician training courses. NGC CNG helped to prepare the NESC trainers, who have so far instructed in excess of 100 CNG Maintenance Technicians who work in various capacities in the automotive field in the public and private sectors.

The motoring public has been and continues to be educated through several awareness campaigns spearheaded by NGC CNG. The Government has also clearly articulated its policy to accelerate the use of CNG as a major alternative vehicular fuel in the country.

In August 2017, Cabinet approved the implementation of a Programme for conversion of 30% of all Government and State Owned Enterprises (SOEs) Vehicle fleets to CNG by December 2020.

The Paris Agreement that entered into force on November 4, 2016 represents a universal treaty on climate change in support of a low-carbon resilient future. Important elements of the Paris Agreement are Nationally Determined Contributions (NDCs), and these represent each country’s public commitments to reduce greenhouse gases post-2020. T&T had deposited our instrument of ratification to the Paris Agreement on February 22, 2018. The CNG programme is an initiative to reduce the emissions from the transportation sector.

As the government continues to play an active role in placing the Environment at the Centre of Social and Economic Development, for a clean, healthy environment and reducing the carbon footprint, I would like to highlight the changes from 2015 baseline figures:
 There was a 98% increase in 2018 CNG volume sales of 5,296,471 litres gasoline equivalent (lge) from 2015 baseline figure of 2,667,780 lge.
 There was a fourfold increase of the number of CNG vehicle conversions of 6,432 vehicles in 2018 in comparison to 2015 vehicle conversions of 1,500.

Based on its market analysis, the NGC CNG projects 806 new vehicle sales (OEM) and 2,694 vehicle conversions for calendar year 2019.

In closing, I would like to congratulate all the stakeholders involved on the achievements thus far and your continued contributions to bring success to the operationalization of this flagship CNG and multi fuel service station, as we increase the supply of CNG into the T&T market.