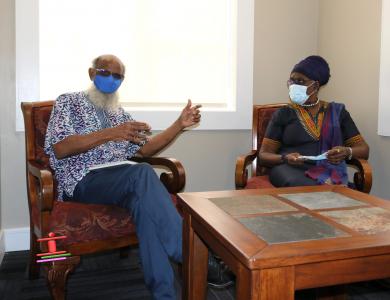 Senator the Honourable Dr. Amery Browne, Minister of Foreign and CARICOM Affairs stated that he recognised the importance of the work of the Emancipation Support Committee of Trinidad and Tobago (ESCTT) to the national community and committed to working with the ESCTT. These sentiments were conveyed during a Courtesy Call with Ms. Zakiya Uzoma-Wadada, Executive Chair, ESCTT and Mr. Khafra Kambon, former Chairman, ESCTT and Director of Regional and PanAfrican Affairs, on Tuesday 15th September, 2020 at the Ministry’s Headquarters.

The Courtesy Call with Ms. Uzoma-Wadada and Mr. Kambon was convened in response to a request from the ESCTT to meet with Minister Browne to advise him on the work of the ESCTT, especially the international component of the Committee’s work, and to explore how the ESCTT and the Ministry of Foreign and CARICOM Affairs could work together.

Discussions during the meeting focused on the International Decade for People of African Descent (IDPAD) and the global reparations movement. Ms. Uzoma-Wadada and Mr. Kambon voiced the ESCTT’s interest in facilitating a partnership between Government and civil society on the topics discussed.

The meeting ended cordially with both parties committing to work closely with each other on matters of mutual interest.