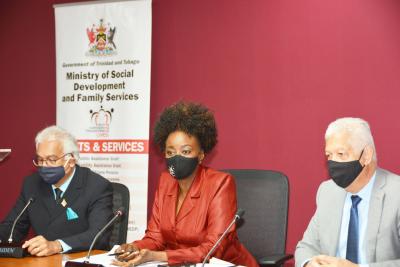 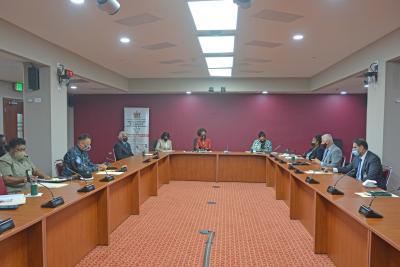 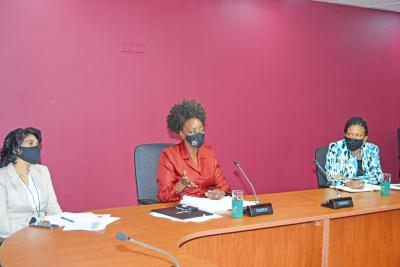 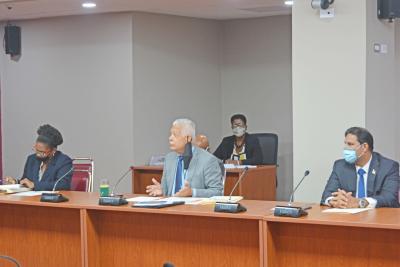 Port-of-Spain: Following the world’s observance and commemoration of Human Rights Day on December 10th 2020, Senator the Honourable Donna Cox, Minister of Social Development and Family Services joined by her Executive Team, led a high level meeting on the issue of street dwelling, earlier today at the Dr. Linda Baboolal Room, Office of the Parliament on St. Vincent Street in Port-of-Spain.

Among those in attendance were fellow Cabinet Colleague, The Honourable Terrence Deyalsingh, Minister of Health, His Worship the Mayor of Port-of-Spain Alderman Joel Martinez, the Commissioner of Police Mr. Gary Griffith, representatives of the San Fernando City Corporation’s Public Health Department, as well as, the representative of the Downtown Owners and Merchants Association, Mr. Anthony Salloum and Mr Brent Lyons, Managing Director Housing Development Corporation (HDC). Also representing the Ministry of Health were CMO Dr Roshan Parasram and Director of Mental Health, Dr. Hazel Orthello. Permanent Secretaries and other Technocrats from the Ministries of Rural and Local Government, Planning and Development and Housing and Urban Development.

During her opening statement, Minister Cox emphasised that the coordination of a whole of government approach to resolving the issue of street dwelling in the nation’s cities and burgesses, remains an area of top priority for the Ministry of Social Development and Family Services. She stressed that any solution to addressing the homeless must include this multifaceted approach, where various stakeholders could on effective strategies so that street dwellers can overcome any unfortunate circumstances that resulted in life that forced them to take to the streets. She acknowledged that although there had been several challenges over the years, it was the Ministry’s intention to get it done right this time and ensure the prudent and effective use of combined resources within a timely manner, so that no person is left behind. Such an approach, she indicated, would afford greater accountability and efficacy on the part of every stakeholder.

Following this a brief presentation was made by Deputy Permanent Secretary in the Ministry, Vijay Gangapersad, who gave some background into the issue in Trinidad and Tobago and an account of what has been achieved to date. Attendees then shared comments and made recommendations, in terms of the way forward. Among the suggestions made was to create an operational mechanism on the ground to engage the population on a continuous basis so as to facilitate sustained and humanistic removal of persons; and capitalise on the current decentralisation of mental health being undertaken by the MOH, where the approach would be to institute assessments at the community level so that persons will be able to have community support as part of their ongoing rehabilitation process. Officials of the HDC also provided useful suggestions that will allow for the implementation of transitional housing facilities to be used by persons in accordance with strict policy guidelines.

In terms of the way forward, all parties agreed that legislative arrangements must be put in place regarding voluntary and involuntary removal of persons; as well as a continuum of care, providing the necessary primary and long term care facilities and services. All parties committed to continued action and dialogue on the matter. As the meeting ended, it was agreed that several technical meetings will follow in order to ensure that tasks outlined are undertaken, sustained and monitored on an ongoing basis.