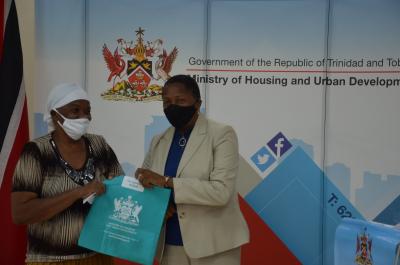 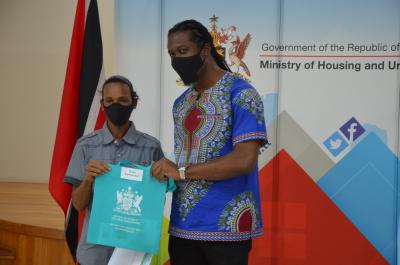 At a distribution ceremony held at the Mt. Hope/Mt. Lambert Community Centre, recipients from various areas of northern Trinidad proudly collected keys to their new homes in the communities of St. Joseph, Matura, Valencia, Cumuto, Talparo, Sangre Grande and other areas.

The Housing and Village Improvement Programme targets villages with neglected infrastructure and poor-quality housing, many of which are located in rural and peri-urban areas. The programme is community oriented and utilises a Village Based–Aided Self-Help Approach which goes further than improving the physical, human and social capital assets of the communities. The HVIP also offers employment opportunities to small contractors within the communities and surrounding areas to keep construction cost down to $120,000 per starter unit.

The Programme is now in its fourth Phase and to date has positively impacted the lives of 199 families across 13 communities. It has also and created employment opportunities for some 1,140 individuals.

The Minister told recipients, “The Government of Trinidad and Tobago is committed to putting people first and keeping the economy buoyant for the benefit of citizens. She added, “This programme satisfies both primary principles: we have put people first and provided suitable and affordable housing; and employment was created that contributed to the health of our economy.

Minister Beckles said, “I am convinced that access to affordable and adequate housing is the right of every citizen!  I am heartened to be able to present to you today the keys to your new homes.”