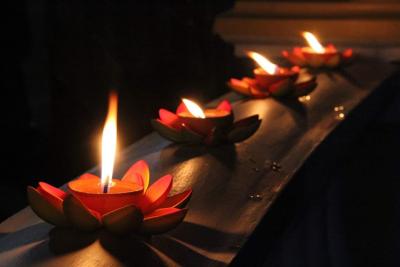 Trinidad and Tobago today joins with the Hindu community to celebrate the festival of Divali -- a time, set aside by devotees, for rejoicing and renewal.

By sunset, our landscape will be transformed, alit with thousands of Deyas, signifying, according to Vedic traditions, the spiritual triumph of Good over evil, Light over darkness, Purity over impurity.

Divali is rooted in India’s five-thousand-year-old ancient history, and is considered one of the most important festivals among Hindus, throughout the world.

Our country, Trinidad and Tobago is one of the most successful multi-cultural, and most significantly multi-religious societies.

In comparison, we can boast of our tolerance, and respect for each other’s beliefs, and ethnicity, but I believe we all need to go further, seeking a deeper understanding of those who occupy this geographical space.

This public holiday of Divali is an ideal juncture to further deepen that understanding of our fellow brothers and sisters. We can turn to each other, bearing in mind the National Watchwords, Discipline, Production and Tolerance -- eliminating polarisation wherever it exists, and replacing it with engagement.

Each one of us promising to engage each other, with civility, as we meet, recognising and seeking a deeper understanding of the other person’s humanity.

The Hindu religion, with its literary supports in the Veda, the Upanishads, and the Bhagavad Gita, carries such a core message, just as those in the Christian, Muslim and other faiths.

The Bhagavad Gita, considered the essence of the Vedic knowledge -- the Gita meaning “Song” -- is arguably among the most extensive, comprehensive and precise scriptural materials.

As “The Song of Solomon” is traditionally known in the Bible as “The Song of Songs”, the Gita is for Hinduism the great unsurpassed Song which identifies what is seen as the secret of human life. It says this is found in our unquestioning surrender and daily awareness of God in our lives.

Trinidad and Tobago, during my government’s time, has experienced economic stringency and to many it seemed among this country’s darkest hours -- but, with the grace of the Almighty, we are all now reaching a turning point, where the Light of this nation is beginning to glow again.

As Hindus clean and decorate their homes, rejoicing and celebrating, let us all join with them, sharing the Light of the Deyas, using them to illuminate a path as we go forward as a nation, comprising disciplined, productive, tolerant and engaged citizens.

On behalf of my family and the government that I lead, I extend greetings and best wishes to the Hindu community and all of Trinidad and Tobago on the observance of Divali.