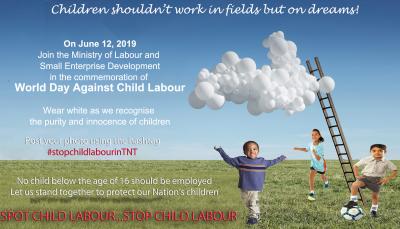 Every year on June 12, Trinidad and Tobago joins with the international community in observing World Day against Child Labour. Spearheaded by the International Labour Organization (ILO), this annual observance provides an opportunity for its constituents to reaffirm their commitment to preventing and eliminating child labour globally, regionally and nationally.  As a member state of the ILO, Trinidad and Tobago reaffirms this annual commitment and supports this year’s Theme which is “CHILDREN SHOULDN’T WORK IN FIELDS, BUT ON DREAMS”. This Theme is timely and relevant, as today, 152 million children throughout the world are still in child labour in almost every sector, where seven out of every ten is within the field of agriculture on a global scale.

This year the International Labour Organization celebrates 100 years of advancing social justice and promoting decent work. Since its founding in 1919, the protection of children has been enshrined in the Constitution of the ILO, as one of the first Conventions established by the ILO was on Minimum Age in Industry (No. 5, 1919).

The ILO defines child labour as work that is mentally, physically, socially or morally dangerous and harmful to children and interferes with their schooling by depriving them of the opportunity to attend school. It is to be noted that not all work performed by children is considered child labour. Child labour should be differentiated from child work. Child work refers to positive participation of children in an economic activity, which is not detrimental to their health or mental and physical development. It is beneficial work, which allows for normal schooling and does not impede the child from doing leisure activities or resting. For example, activities such as helping their parents around the home and assisting in a family business are not considered child labour. In fact, these activities can contribute to children’s development and to the welfare of their families, it can provide them with skills and experience and help to prepare them to be productive members of society during their adult life.

Children continue to remain the nation’s most valuable treasure and the Government’s vision, as dictated in the National Child Policy, is that “All children are happy, healthy and confident; and their rights are respected, protected and promoted to facilitate their holistic development towards achieving their fullest potential as constructive members of society now and in the future”.  We must continue to work together to preserve this precious asset, our children.

The Government of the Republic of Trinidad and Tobago ratified the United Nations Convention on the Rights of the Child (CRC) on December 5th 1991, two years after it was adopted by the UN General Assembly on November 20, 1989. The CRC is the most prominent international legal instrument safeguarding the rights of children and outlines the responsibilities of Member States in ensuring children’s rights are upheld, promoted and protected. With Government’s reaffirmation to preventing child labour and child trafficking by the ratification of the ILO Conventions on Minimum Age and Worst Forms of Child Labour, and the Palermo Protocol on Trafficking in Persons, and by signing the Declaration of the Regional Initiative: Latin American and the Caribbean Free of Child Labour we continue to stand commitment to the global cause.

Recognising Child Labour as a cross-cutting issue, Cabinet approved the Establishment of the National Steering Committee for the Prevention and Elimination of Child Labour. Instruments of appointment to this Committee was made by myself, as Minister of Labour and Small Enterprise Development on February 27th 2019. The Committee comprises representatives from fourteen (14) government agencies, two (2) NGOs and academia through the University of the West Indies.

The role of this Committee is to mitigate the negative impact child labour has on national development. It is mandated to oversee the implementation of critical activities associated with the prevention and elimination of child labour in Trinidad and Tobago; including the conduct of research to better understand the enabling factors and root causes of child labour. The Committee has also been charged with the responsibility of developing a National Child Labour Policy and Action Plan.

In Trinidad and Tobago, the Children Act 2012 provides that the minimum age for admission to work is 16 years, which is consistent with the provisions of the Education Act which requires that children between the ages of 5 to 16 years attend school. The Labour Inspectorate Unit and the Occupational Safety and Health Agency of the Ministry of Labour and Small Enterprise Development hold responsibility for enforcement of the legislation relating to child labour. However, we each have a role to play in preventing and eliminating this scourge where it exists.

“Child labour perpetuates poverty, unemployment, illiteracy, population growth, and other social problems”. Let us continue to work together to ensure that our most precious asset are protected, unscarred by the scourge of child labour, that their universal rights continue to be upheld, and that they are provided with ample support to blossom into happy and productive members of society.

May God bless our nation’s children and those all around the World.