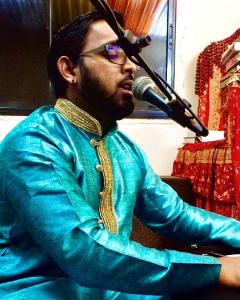 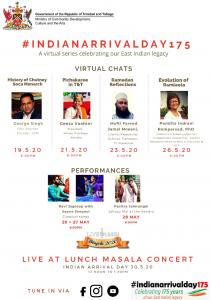 Since their arrival in 1845, East Indians, not only within Trinidad and Tobago, but throughout the West Indies, have made and continue to make an indelible mark on all spheres of life: the arts, academia, politics, culture and more. Through the decades, the contributions of the East Indian community have become part of our mainstream culture and have added further character and distinction to our multi-ethnic artistic expressions.

Minister Nyan Gadsby-Dolly stressed the importance of celebrating our heritage as a country.  According to the Minister of Culture, “now more than ever, we cannot afford to forget or lose what makes us who we are as a dynamic, plural and multicultural society. The influence of the East Indian community is seen in every sphere of our culture from music to dance, to theatre, food and visual arts. Our society is enriched by the multiplicity of experiences that this heritage informs; and when all is said and done, recognizing and celebrating our history will help us move forward with confidence to form our future.”

As such, in commemoration of Indian Heritage Month and the 175th Anniversary of the arrival of East Indian indentured labourers to Trinidad and Tobago, the Ministry of Community Development, Culture and the Arts has embarked on a campaign of activities highlighting aspects of our culture influenced by our East Indian heritage. The digital campaign will feature a series of virtual chats with key influencers and cultural performances. The series will then culminate with Masala, the fourth in the Live@Lunch Concert Series for 2020, on May 30, 2020. The concert, which will be streamed on the Ministry’s facebook page @artsandculture, will feature classical singer Ravi Jagroop, a poem by Rajan Maharaj, Dancer Alana Rajah, The National Steel Symphony Orchestra and The National Philharmonic Orchestra.  The digital campaign which started earlier in May kicks into full gear with a series of virtual chats and performances as follows:

May 19@6pm: History of Chutney Soca Monarch with George Singh, CEO of Southex and founder of CSM;

May 21:  Pichakaree in Trinidad and Tobago with Geeta Vaahini, President of the Hindu Prachaar Kendra

May 26: Evolution of Ramleela with Pandita Indrani Rampersad, Intellectual Kshatriya/Warrior and Researcher.

Viewers can tune in to the Ministry of Community Development, Culture and the Arts' facebook page @artsandculturett, Youtube and Instagram @CultureCommunitt for this exciting initiative, which is aimed at celebrating and appreciating the diversity that we all enjoy.