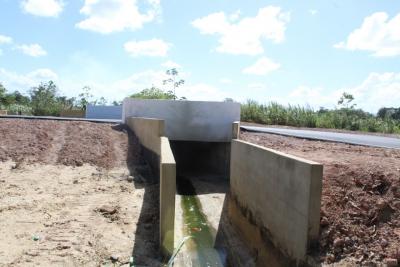 Residents of Greenvale Park can be comforted that the majority of the mitigation and infrastructure work that was proposed for the community, has been completed in time for the rainy season.

June 1, 2019 a technical team from the HDC, comprising the Divisional Manager, Estate Management; Senior Manager, Project Execution; a Civil Engineer from the Project Development and Oversight Division and the Clerks of Work, reviewed some of the completed work.

These works include the raising of the containment berm to fully surround the community; the raising of the berm and culvert, crossing the eastern access road; the raising of roadways surrounding the community  and the construction of a road to connect La Horquetta South and Greenvale Park, which will be used an an alternative exit route for residents. Work is currently underway on the construction and installation of an automated flood pumping station  to ensure increased and more reliable pumping capacity at the detention ponds.

In addition to the mitigation work that has been conducted, the HDC procured the services of a number of contractors to refurbish 435 housing units which were damaged by the floods.

These works included re-tiling of the interior areas, installation of new cupboards, doors and kitchen furnishings and the repairs to electrical outlets. To date, repairs to 375 homes have been completed and handed over to residents with the remaining units requiring minor work, such as installation of cupboards. These are expected to be completed shortly.

Since last October’s flood event, the HDC has ensured that the organisation maintains an active presence in the Greenvale Park community. From November 2018 to January 30, 2019, a Recovery Centre was established to treat with the needs of the residents and coordinate relief and the requisite psycho-social support from the state agencies. Notices, flyers and updates have been delivered personally to residents over the last  six months and also posted via the HDC’s social media platforms.

According to the HDC’s Managing Director, Brent Lyons, “we understand the unease that some residents may feel as we approach the rainy season. This is why we wanted to ensure that the majority of the works which we promised, were completed by June 01.

We also ensured that our contractors were able to complete the major work on the affected homes, notwithstanding the challenges that were encountered along the way. Feedback from residents indicate that they are pleased with the work that has been done. We will continue to implement measures here at Greenvale Park and at Oropune Gardens in order to minimise as much as possible, the impact of flooding in our communities.”

The Ministry of Works and Transport’s Drainage Division has also conducted work on the Caroni River which is on the outskirts of the Greenvale Park community. In addition to the work at Greenvale Park,  the HDC also began  highly critical work on units in Oropune Gardens. These works are expected to be completed within three weeks.