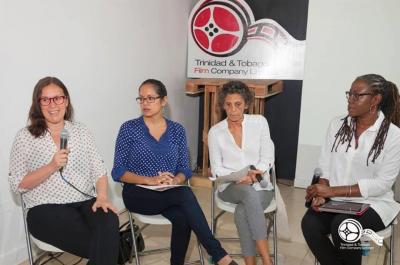 Members of the local film community recently came together as the Trinidad and Tobago Film Company (FilmTT) hosted their inaugural “Producers’ Talk” event at Grundlos Kollektiv on Monday 4th June, 2018. This event was the first of its kind for the film company, which facilitated three of the country’s producers in a discussion on their maiden feature films: Abigail Hadeed, producer of Play the Devil by Maria Govan (2016); Teneille Newallo, producer/writer of The Cutlass by Darisha Beresford (2016); and Emilie Upczak – director/producer, Moving Parts (2018).

FilmTT General Manager, Nneka Luke, explained that the “Producers’ Talk” was a forum for peers to gather and learn from each other’s experiences, in service of the overall progression of the film and audio-visual sector. “It’s a challenge producing a film for the first time. Each of these films went through slightly different journeys to get to a place where each has an international sales agent, which is a big deal for films from our region,” she disclosed.

The interactive conversation focused on several key elements needed to produce an independent film, as well as each producer’s experience and approach to filmmaking. Topics included: filming locations in Trinidad and Tobago beyond sand, sea and sun; navigating international film festivals through festival strategies; funding models for the film business, including sponsorships, in-kind support, brand integration and equity investment models; the importance of local content and the role of the broadcast industry and local cinemas with a regional reach; defining the pitch to potential investors and sponsors, and more.

The audience at “Producers’ Talk” consisted of a good cross-section of persons with varying years of experience in the sector, including several notable industry professionals such as Lorraine O'Connor, FilmTT Board Director and producer of Bazodee; Micheal Mooleedhar, director of Green Days By the River; Su Goldfish, visiting writer/director of the new TT/Australia documentary, The Last Goldfish, broadcast veteran and PR specialist Francesca Hawkins; director of the 2017 short film Salty Dog, Oliver Milne; and publicist and creative industries advocate, Janine Charles-Farray.

Luke added, “We took this opportunity during the week of the premiere of Moving Parts to bring the conversation full circle, and talk about what went into producing each of these films.” Moving Parts, a poignant tale about human smuggling, is the latest T&T-set film to premiere here. The film has been held over at Movietowne Port of Spain for a second week until Tuesday 12th June, with more theatre screenings to be scheduled across Trinidad and Tobago in the near future.

Psychological thriller The Cutlass first premiered in 2016; after a successful run in local and regional cinemas and a few international film festivals, it is now available to rent or buy through iTunes, DirectTV, Comcast, Vudo, or watch for free with Amazon Prime. Play the Devil, which also premiered in 2016, has played and won awards at more than 40 film festivals all over the world, and is available for purchase on Amazon.