Local business competitiveness to be enhanced with new export programme 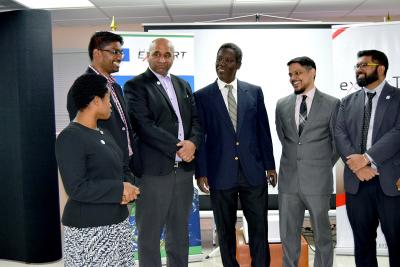 According the Mr Norris Herbert, Permanent Secretary at the Ministry of Trade and Industry, who delivered remarks at the project launch on February 6,  “the Government of Trinidad and Tobago has adopted an export-centric and competitive-oriented approach to economic growth and development.” Referencing the SME Diagnostic Tool developed by Caribbean Export which is being utilised during project implementation, the Permanent Secretary expressed delight that exporTT was the first Business Support Organisation in the Caribbean to adopt the SMEs Diagnostic Tool Assessment as the foundation for building export competitiveness. These strategies he added included the application of the tool’s findings which once effectively utilised will target a 20% increase in the non-energy exports over the next five (5) years.

Executive Director of the Caribbean Export Development Agency, Ms Pamela Coke-Hamilton highlighted the need for similar targeted support programmes catering to the needs of local firms. “The expected outcome,” she stated “is that through a more tailored programmatic support to firms, the will become better equipped to compete in export markets.”

This sentiment was reaffirmed by exporTT’s Chief Executive Officer Mr Dietrich Guichard who indicated that the initiative will advance the performance of the beneficiary companies along the curve of export competiveness, enhancing export sustainability deepening and widening their penetration in export markets of interest while also generating much needed foreign exchange.

The Export Competitiveness Project commenced with a competitiveness study of selected exporters which will be followed by a gap analysis utilising the Diagnostic Tool and the formulation and implementation of export development plans for participating companies over a 12 month period.