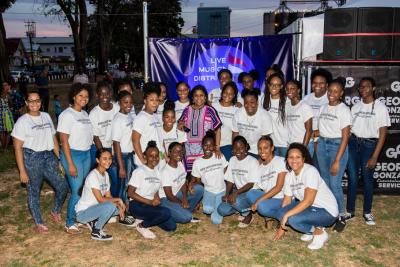 Live Music District’s Turn it up! Live on the Avenue featured an exciting musical and entertainment lineup of performances aimed at establishing the City of Port of Spain as the cultural epicenter of local music. From Steelpan to Soca, R&B and more, patrons experienced the thrilling renditions of Iron Love by Desperadoes Steel Orchestra, sweet interpretations of Savannah Grass by Neisha Guy, original tunes from Jhonn Young, a little bit of the Electric Slide from Sherisse Collymore, and a lot more.

“MUSICTT is continuing its mission to establish the city of Port of Spain as an entertainment hub for live music. We see the potential of these spaces as revenue drivers for local businesses, artistes, and industry professionals eager to establish year-round business outside the typical Carnival season. Our work alongside the collaborative efforts of our partners seek to spotlight the alternatives in local entertainment...” General Manager MUSICTT Melissa Jimenez.

The Live Music District was launched in March 2018 and has since provided local artistes with opportunities to showcase their talent at various events and locations throughout the Port of Spain district. Registered artistes have performed at venues such as D’Bocas, Smokey and Bunty, Xperience Event Centre, Radisson Hotel, Hilton Hotel, Kaiso Blues Café, and Rizzoni’s to name a few, as well as at signature events at the Botanic Gardens, Ariapita Avenue, Adam Smith Square, and Brian Lara Promenade.

For more information on the Live Music District visit www.musictt.co.tt/LMD.