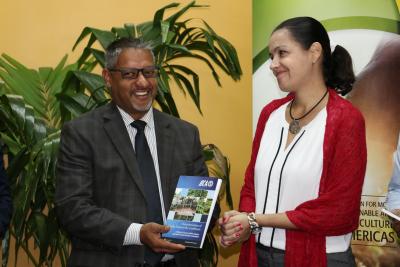 Senator the Honourable Clarence Rambharat, Minister of Agriculture, Land and Fisheries says that land tenure remains the most important element of agricultural development in Trinidad and Tobago as it speaks directly to the issue of succession planning which is key to sustainability.

He made this statement – as he addressed local, regional and international attendees at a Seminar, hosted by the Inter-American Institute for Co-operation on Agriculture (IICA) on Tuesday 28th November, 2017. The Seminar, which was entitled, ‘Family Farming in the Caribbean Region: Characteristics, Dynamics and Challenges for Public Policies’, took place at the University Inn and Conference Centre, University of the West Indies (UWI) in St. Augustine.

The Minister, who referred to the absence of land tenure as a “demotivating factor”, said that while farming was not “radically different” from any other business model, it remained the only “type of enterprise in the country” where land tenure was not valued “as the cornerstone of the investment” or as in the case of farming families, not regarded “as the important element in succession planning.”

He added that data on local family farming was “vital” to the industry as it impacted significantly on public policy decisions and in particular, decisions that facilitated an enabling market for value-added products which appealed more to the younger generation. On this note the Minister cited that it was his intent to have the National Agricultural Marketing Development Corporation (NAMDEVCO), discontinue its production of the value-added “callaloo packs” so as to allow “farming families to flourish” in the market.

He said: “I don’t think that State funds should be used to subsidize and create problems for private producers. The next generation of family farmers should be focused on taking the product and making it more convenient for the consumer to use. Value-added represents an important element for sustainability for the next generation as it involves mechanics, technology, branding and other dynamics that attracts young people.”

Sharing Minister Rambharat’s view on the importance of data collection on farming families at the Seminar was IICA Representative in Trinidad and Tobago, Mr. Gregg Rawlins who hoped that the event will “increase the understanding of all stakeholders” on the issue of family farming and “enable stakeholders, researchers and policy-makers” to advance an agenda in which it can be positioned to really support the development of the agricultural sector in the Region.

“It is in all our interests that we seek to better understand the characteristics and contribution of family farming in the Caribbean Region so that we could be sure that we adopt and implement policies and programmes which ensure that family farms can make the fullest contribution that they can towards food security as well as rural, community and national development,” he said.

Also presenting at the Seminar was the Leader of IICA’s Family Farming Flagship Project, Ms. Fatima Almada and Dr. David Dolly – one of the authors (alongside Mr. Glenroy Ennis) of the publication on the study, ‘Characterisation of Family Farms in the Caribbean’, which was launched during the event’s opening ceremony.