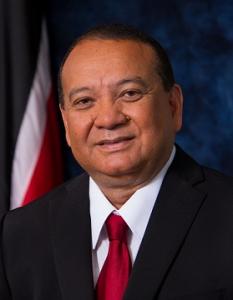 The Honorable Franklin Khan was appointed Minister of Energy and Energy Industries on August 19, 2020.

Senator Franklin Khan is a Petroleum Geologist by profession, having spent twenty years in the energy sector both locally and abroad in a wide range of positions both at the technical and managerial levels.

Senator Khan holds a BSc Degree in Geology and Geography (1980) from the UWI (Mona) Jamaica, and an MBA (2007) from the Arthur Lok Jack Graduate School of Business, UWI (Trinidad).

Professionally, Senator Khan served as President of the Geological Society of Trinidad and Tobago on two occasions. He also served as Director of the Water and Sewage Authority (WASA) (1986-1990) and as Chairman of National Petroleum Marketing Co. Ltd. (NPMC) from 2001-2002.

In August 2020, he was reappointed to the portfolio of Minister of Energy and Energy Industries for a second term.