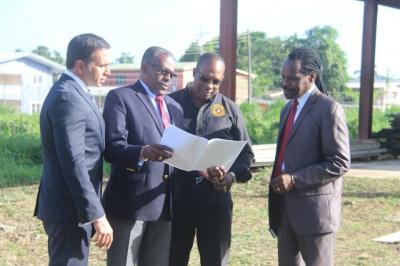 A high-level team led by the Minister of National Security Major General (Ret’d) the Honourable Edmund Dillon on Friday 05 January, 2018 visited the Trinidad and Tobago Prison Service’s Video Conferencing Facility and the Eastern Correctional Rehabilitation Centre (ECRC) as well as the Immigration Detention Centre to get a first-hand view of the progress of ongoing construction projects at these facilities. Minister Dillon was accompanied by Attorney General and Minister of Legal Affairs the Honourable Faris Al Rawi; Minister in the Ministry of the Attorney General and Legal Affairs the Honourable Fitzgerald Hinds and Commissioner of Prisons (Ag.) Mr. Gerard Wilson

The Ministerial team noted the significant work underway at the Video Conferencing Facility at Remand Yard, Golden Grove, Arouca, a cutting-edge structure which will enable the conduct of court hearings via video link. The facility which is at this time 70% complete will not only provide those remanded with greater access to their court matters but also decrease transportation costs to the state.

Friday’s tour also presented marked improvements at the Immigration Detention Centre (IDC) in Aripo, as the upgrade of the facility nears completion. When completed, the facility will satisfy international detention centre standard.

During the visit, Minister Dillon also took the opportunity to interact with the various stakeholders in the system including prison officials, ECRC inmates and IDC detainees, to get an intimate understanding of their concerns and encounters in the penal and detention systems.

Attorney General Al Rawi indicated that plans are already in train to accelerate a comprehensive legislative package including updating the existing Prison Rules and other key pieces of legislation to treat with the safety and security of both prison officers and inmates.

Minister Dillon also restated Government’s commitment to the improvement of prison conditions and gave the assurance of the commencement and completion of other critical infrastructural upgrades geared towards greater security conditions for prison officers, as well as creating a more humane environment for inmates and persons detained at the Immigration Detention Centre.