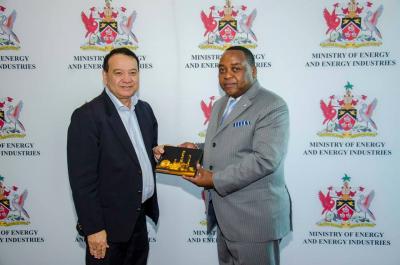 Minister of Energy and Energy Industries Franklin Khan (right) with a member of the visiting delegation from Equatorial Guinea.

On Friday, April 26, 2019, Senator Franklin Khan, the Minister of Energy and Energy Industries met with a visiting delegation from the Republic of Equatorial Guinea. The delegation came to deliver a formal Letter of Invitation to the Prime Minister of Trinidad and Tobago, Dr Keith Christopher Rowley requesting his attendance at the 5th Gas Exporting Countries Forum Summit, to be held in Malabo, Equatorial Guinea in November 2019.

The Equatorial Guinea delegation was led by H.E. Santiago Mba Eneme Nsuga, Secretary of State of Mines and Hydrocarbons. Other members included Mr. Juan Roque Castillo Nsie Ayang, Mr. Ruben Dario Mbela, and Ms. Maria Luna Nchama Ndong Nchama. At the meeting, H.E. Eneme Nsuga mentioned that the model for natural gas monetization utilised by Equatorial Guinea is a reproduction of Trinidad and Tobago’s energy sector. Thus, the Government of Equatorial Guinea considered it appropriate to personally deliver the Letter of Invitation to the Honourable Prime Minister of the Republic of Trinidad and Tobago.

The Gas Exporting Countries Forum (GECF) is an internationally recognised organization, comprising the world’s leading natural gas producers. The objectives of the GECF are to support the sovereign rights of member countries over their natural gas resources and their abilities to independently plan and manage the sustainable, efficient and environmentally conscious development, use and conservation of natural gas resources for the benefit of their citizens. They also seek to promote dialogue between gas producing nations and consuming countries. Together, the GECF members currently account for more than sixty per cent (60%) of the world’s proven reserves of natural gas.

The GECF Summit is a Biennial Event that includes Heads of State and Heads of Government of the GECF from the Member and Observer countries, along with local and regional stakeholders. The 4th GECF Summit was held in Bolivia in 2017.

The Equatorial Guinea delegation also took the opportunity to meet with the acting Minister of Foreign and CARICOM Affairs, Major General Edmund Dillon, as well as officials from the National Gas Company of Trinidad and Tobago (NGC). Officials from the NGC presented an overview of the company, followed by a guided tour of the Point Lisas Industrial Estate.