HDC residents in Moruga get a new community play park 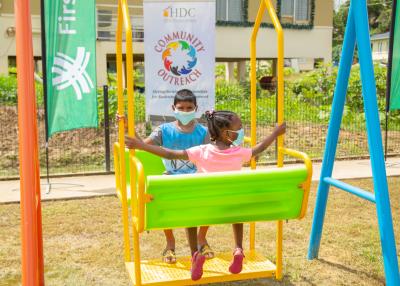 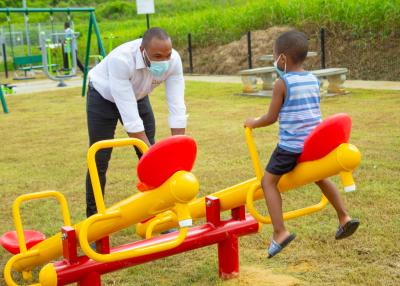 Residents of the Trinidad and Tobago Housing Development Corporation’s (HDC) Gomez Trace Phase II community in Moruga now have a community space of their own. This community play park was formally opened on Wednesday July 08 by representatives of the HDC and First Citizens, who assisted with the construction of the space.

Since 2016, the HDC has constructed more than twenty (20) recreational spaces and parks in many of its housing communities across Trinidad and even in Tobago. Four of these community play parks were constructed with the kind support of First Citizens which shares the HDC’s vision for the development of sustainable communities. These four community parks are located at Harpe Place, east Port of Spain; Awai Lands, Belmont; Adventure, Tobago and Gomez Trace Phase II, Moruga. A fifth community play park is being constructed at Carlsen Field, Chaguanas also with support from the bank.

The HDC believes that recreational spaces like community play parks are beneficial to all residents – from the young to the not so young. These open spaces allow for the development of children’s motor skills, facilitate positive interaction among neighbours and can help reduce anti-social behaviour and activities.

According to HDC Managing Director, Brent Lyons, the HDC’s goal is not only to construct homes but to strengthen communities and it is for this reason that “we will continue, once funding permits, to construct play parks in communities where we know that they will assist in the overall safety and development of the community.” By 2021, the HDC intends to construct ten (10) more parks at various communities across Trinidad.