Greater security coming to every community 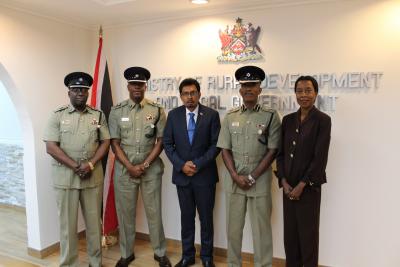 As part of the push forward with the pillar of local government reform to increase the numbers of the Municipal Police Service, these officers will ensure cohesive leadership across all municipalities. Assistant Commissioner Brian Headley will be charged with oversight of the entire Trinidad and Tobago Municipal Police Service (TTMPS) while Senior Superintendents Glen Charles and Carlisle Huggins will be responsible for the North and South regions, respectively.

Minister Kazim Hosein said “This initiative was born when we were in opposition in 2012. We wanted to restore the notion of the police being respected in the community and providing a service that makes the families which make up our country feel safe in their homes and on their streets. It is finally coming to fruition, with the 541 potential Police Constables who have recently taken the exam and the appointment of these well-seasoned officers who have a long history of dedicated service.”

Assistant Commissioner Headley expressed the intention to bring back foot patrols throughout every municipality so that officers can reconnect with the communities and their burgesses, lamenting that the municipal police had lost its connection with the public. Senior Superintendent Charles in speaking for the group stated his desire to focus on the customer service of the TTMPS and improve the way that they interact with the public.

Minister Hosein stated “We are now relying on these officers to make the distinction between hard policing and soft policing, and restore the community relations that existed in the past. The TTMPS is funded by and accountable to the citizens, and they must cultivate relationships with the burgesses to restore a sense of safety and security in all communities.”