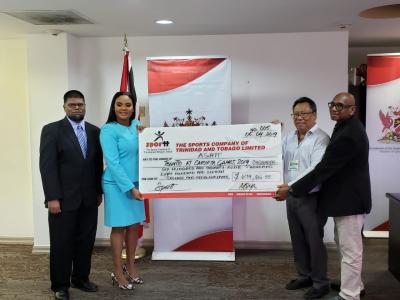 The NAAATT will lead a contingent of 55 athletes and 22 officials to the Cayman Islands, to compete against athletes from 27 Caribbean Islands in events for the Under-17 and Under-21 age categories.  The team leaves on April 18, and will return to Trinidad and Tobago on April 24, 2019.

Similarly, ASATT’s contingent will comprise of 54 athletes for the water polo events and 46 athletes for the swimming events.  Participation at these events will occur in two phases, with the first team leaving for Barbados on April 11, and the second on April 19, 2019.  The teams will return to Trinidad on April15 and 24, respectively.

Prior to the cheque presentations, which took place at the Ministry’s Head Office in St. Clair, last Friday, Minister Cudjoe spoke with officials from the two (2) National Governing Bodies (NGBs) and extended best wishes and success to the athletes and members.

"In keeping with our mandate, the Ministry of Sport and Youth Affairs will continue to ensure that the development of sport for each discipline is achieved, as they pursue opportunities to showcase their talents regionally and internationall," stated a media release.