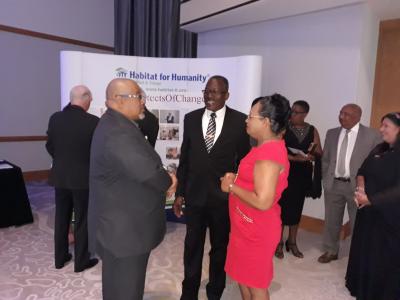 The Honourable Major General (Retired) Edmund Dillon delivered the feature address at the Habitat for Humanity Hunger Banquet on Sunday 17th March, 2019. This is the seventh year that the Banquet was being hosted by the local chapter of Habitat for Humanity – Habitat Trinidad and Tobago.

Minister Dillon congratulated Habitat for Humanity on its twenty-second anniversary of operations in Trinidad and Tobago and in so doing acknowledged the work of the organization under the guidance of its National Director, Ms. Jennifer Massiah during that time. Minister Dillon commended Ms. Massiah and her team for providing shelter options as well as training opportunities for low to lower middle income families.

The Minister also noted that the Government understands that given the economic climate at this time, it is not always able to fully satisfy the need for shelter. Nevertheless, the Government remains fully committed to improving the living conditions of low to lower middle income families all over the country. It is for this reason, the Ministry of Housing and Urban Development, through its various agencies, has been able to deliver affordable, innovative, sustainable housing options to meet the needs of those who are desirous of public sector housing.

Minister Dillon further stated that the government is unwavering in its efforts to create wholesome communities that not only provide housing but also recreational spaces and commercial centres that cater to the growth and development of families. The Minister said that he views the work of Habitat Trinidad and Tobago as functioning in tandem with the initiatives of this Government in providing simple, decent, affordable housing and improving the condition of the existing housing stock through its Micro Built initiative.

The Minister closed by saying he was truly appreciative of the benefits to be derived from these kinds of symbiotic and synergistic partnerships that has been characteristic of the relationship with Habitat Trinidad and Tobago. Minister Dillon emphasised that the Government and the Ministry will continue to ensure that the housing policies, programmes and initiatives are geared towards promoting community-led development, environmental sustainability and affordable housing for those who need it most.

He ended his address by encouraging more donors and more private partnerships to contribute to the expansion of the local housing stock as well as provide a viable space for groups like Habitat Trinidad and Tobago.