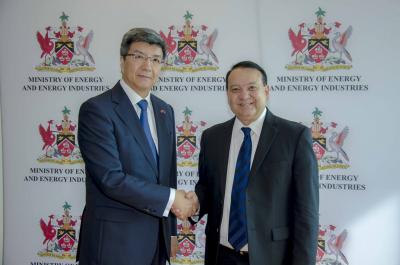 Senator the Honourable Franklin Khan, Minister of Energy and Energy Industries (right) receives a courtesy call from His Excellency Song Yumin, Ambassador of the People’s Republic of China to the Republic of Trinidad and Tobago on March 25, 2019 at the Head Office of the Ministry of Energy and Energy Industries, Tower C, International Waterfront Centre, Port-of-Spain

Senator the Honourable Franklin Khan, Minister of Energy and Energy Industries, has been invited to participate in the 19th International Conference and Exhibition on Liquefied Natural Gas (LNG 2019) which will be held in Shanghai, the People’s Republic of China over the period April 1-5, 2019 and he would be speaking in the Plenary Session ‘Opportunities in the China LNG Market’ on April 5, 2019.

LNG 2019 is being co-facilitated by the International Gas Union (IGU), Gas Technology Institute (GTI) and the International Institute of Refrigeration (IIR) and is the only LNG event conducted by the industry, for the industry. This event is now held every three (3) years, alternating between LNG exporting and LNG importing countries. From the inception of this event in 1968, this International Conference and Exhibition has grown into the most important and significant LNG event globally.

Technology is a significant factor in the exploration, processing, transport and use of natural gas globally. LNG 2019 will provide unique interactive sessions that will provide a showcase of the LNG industry's latest technical developments. Presenters will share their findings on topics such as Process Technology, Modelling and Optimization and the application of Smart Systems.

China is an emerging LNG market, and its efforts in using cleaner fuels to mitigate carbon dioxide emissions and significantly reduce air pollution in cities have led to growth in natural gas imports and the use of small scale LNG. The country plans to increase the use of natural gas from 6% to 10% of its energy consumption by 2020. China has recently surpassed South Korea as the second largest LNG consumer in the world, after Japan.

China has the potential to be a significant trading partner with Trinidad and Tobago (T&T). The increase of natural gas consumption in China can provide an avenue for greater market access for LNG sourced from T&T. This can provide opportunities for synergy between the China Investment Corporation (CIC) and the National Gas Company of Trinidad and Tobago (NGC) (both minority shareholders of Atlantic Train I)  to participate in the natural gas supply and gas infrastructure boom in the domestic Chinese market.

Prior to the departure of Minister Khan to Shanghai, there was .a courtesy call by His Excellency Song Yumin, Ambassador of the People’s Republic of China to the Republic of Trinidad and Tobago on March 25, 2019 at the Head Office of the Ministry of Energy and Energy Industries, Tower C, International Waterfront Centre, Port-of-Spain. During this courtesy call, there were discussions held on matters of mutual interest to both China and T&T.