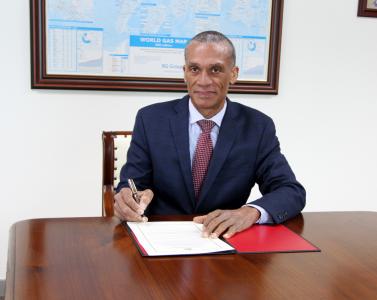 Senator the Honourable Dennis Moses, Minister of Foreign and CARICOM Affairs, signed the following Instruments of Accession to a Convention and three Treaties of the World Intellectual Property Organization on behalf of the Republic of Trinidad and Tobago:

Among the provisions of the Rome Convention is protection for performers, for example, actors, singers, musicians, dancers and other performers of literary or artistic works against the broadcasting and communication to the public of their live performances without their consent.

Benefit to the Beijing Treaty includes safeguarding of the rights of audiovisual performers from the unauthorized use of their performances in various audiovisual media, inclusive of television, film, video, pay-tv channels, DVDs, internet and the mobile environment.

The Singapore Treaty creates a modern and dynamic international framework for the harmonization of administrative trademark registration procedures.

The Marrakesh Treaty addresses the “book famine” and facilitates increased access to printed material to persons who are blind, visually impaired, or otherwise print disabled (VIPs). Other benefits include improving awareness of the challenges faced by the print disabled community and persons with disabilities; and improving the availability of printed material in accessible formats, thereby ensuring that VIPs can enjoy equal access to education.