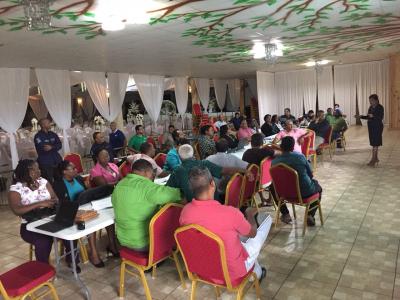 Farmers can “wean themselves off Government support” and proactively find solutions through their own collective efforts. Such was the philosophy behind the Agricultural Co-operative model as espoused by Co-operative Officer II of the Ministry of Labour and Small Enterprise Development (MOLSED)- David Greaves - in his address to farmers and other agricultural stakeholders at an Engagement Session on Thursday 30th November, 2017, at the Enchanted Gardens Banquet Hall in New Grant (via Princes Town).

The Session - which was facilitated by the County Agricultural Officer (Victoria) of the Ministry of Agriculture, Land and Fisheries (MALF), Ms. Sati Gangapersad - was geared towards sensitizing attendees on the benefits of: agro-processing; forming an agricultural co-operative and the many services offered to farmers by the State. The Co-operative Officer II (MOLSED), who encouraged both individual farmers and farming groups “to come together” in order to “address common needs”, advised too that the Co-operative model could be the ideal problem solver.

“The Co-operative takes the stress off the individual farmer and in turn, shares the burden amongst its members who formulate solutions to these challenges, together,” Greaves said. He added: “More so, it helps take the burden off the powers that be by empowering you, the farmer, to do things and make things happen for yourself.”

In emphasizing the need for farmers to “become more competitive, profitable and truly advance themselves across the agricultural value chain”, former Chief Technical Officer (MALF) and current Advisor to the Permanent Secretary (MALF) - Patricia La Borde-Grant - admitted that such was a feat which could not be achieved alone but required the collaboration of both farmers and agro-processors as one, unified entity.

Such a union, she said was strategic in positioning its members to have optimum access to the soon-to-be realized, Moruga Agro and Light Industrial Park - an agro-processing and marketing warehouse which is to be operationalized in 2019. “Our agricultural export sector can be revamped when Agricultural Co-operatives access this facility as it will cater for the effective marketing of collective (or combined) quantities of produce where previously, individual farmers and agro-processors would not have been able to avail themselves to such an opportunity,”  La Borde-Grant said.

Among those persons and stakeholders present at the Session were: Director (Ag.), Dr. Michelle Mellowes and Deputy Director (Ag.), Hansley Durbal and - both of MALF’s Regional Administration South (RAS) Division - as well as the Praedial Larceny Squad (MALF); Agricultural Development Bank (ADB) and farmers groups from Williamsville, Tableland, Princes Town and Moruga.