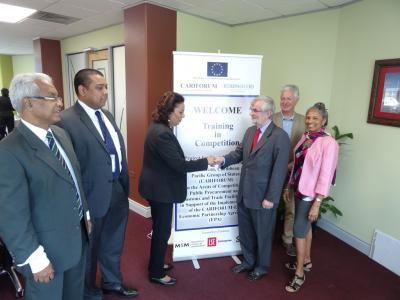 February 26, 2016: The Trinidad and Tobago Fair Trading Commission (TTFTC) hosted a Workshop on ‘the Fundamentals of Competition Law and the use of economic tools in competition law enforcement’ on Thursday 25 February, 2015 at the Ministry’s Head Office in Port-of-Spain. The Workshop, which involved Agencies such as the Telecommunication Authority of Trinidad and Tobago; the Regulated Industries Commission; the Securities Exchange Commission; the Ministry of the Attorney General and the Ministry of Trade and Industry, focussed on the importance of competition law and policy during a period of economic downturn and the challenges in developing a competition culture in a new environment.

In welcoming the participants to the Workshop, Justice Amrika Tiwary-Reddy, Chairperson of the TTFTC stated that ‘the Workshop comes at a particularly crucial time given the importance of competition law and policy to economic development. The decision to invite all Agencies represented here today was strategically thought out since you are charged with the responsibility of administering and enforcing competition policy in Trinidad and Tobago’.  Justice Tiwary-Reddy made a call for the dialogue between Agencies to continue, she said ‘we hope that this workshop will be a learning experience, with the expectation that there will be continuous future engagement between the Commission and the respective Agencies in developing a competition culture in T&T’.

Professor Frederic Jenny, former Supreme Court Judge of France and renowned expert in the area of competition law and policy facilitated the very insightful session. He noted that ‘the adoption and enforcement of competition law has been increasing over the past 10 years and this is so since it is an absolutely necessary instrument in a market economy’.

Professor Jenny’s presentation focussed on areas such as the benefits of competition law for economic development and poverty alleviation; pillars of competition law: prohibition of anti-competitive agreements and merger control regulations; constraints to competition in markets and pre-requisites for effective competition enforcement; economic concepts useful in law enforcement; use of economics in determining use of a dominant market position and in merger analysis; and economic tools such as econometrics to measure the effect of allegedly anti-competitive practices.

Ministry of Trade and Industry