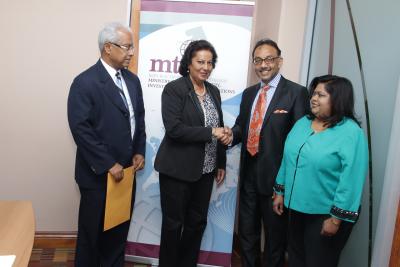 July 9, 2014: ‘The issues that confront us, particularly cross border trading, make fair trading, and particularly that of the work of the Commission so relevant’ stated the Honourable Vasant Bharath, Minister of Trade, Industry, Investment and Communications at the short Distribution Ceremony for the appointment letters for the three Commissioners of the Fair Trading Commission, held at the Ministry’s Port of Spain Head Office on Wednesday 9th July, 2014.

This is the first in a series of key steps to fully operationalize the Commission.

The Commission consists of three Commissioners, namely, Justice Amrika Tiwary-Reddy, Chairperson of the Commission; Dr. Ronald Ramkissoon and Dr. Anne Marie Mohammed.  The responsibilities of the Commissioners include, inter alia, the making of decisions on investigations conducted by the Commission staff; hearing any person or business which is likely to be affected by its decisions; and participating in consultations in national, regional and international fora.

Dr. Tiwary-Reddy is a recipient of the Chaconia Medal Gold in the field of Law and most recently served as a Judge in the Supreme Court of Trinidad and Tobago; Dr. Ramkissoon is currently Republic Bank’s Senior Economist and Manager of its Economic Intelligence Unit; and Dr. Mohammed is a Lecturer in the Department of Economics, Faculty of Social Sciences, University of the West Indies.

The Trinidad and Tobago Fair Trading Act (the Act) was passed in 2006 as part of a wider Competition Policy that aims to protect, promote and encourage the competitive process. The Act complements other Government policies that promote competition, including those aimed at combating dumping and other unfair trading practices.  The Act provides for the establishment of a Fair Trading Commission which has the responsibility for promoting and maintaining fair competition in the domestic market.  The Commission is empowered to both investigate the various forms of anti-competitive business conduct set out in the Act and keep business conduct in Trinidad and Tobago under review, so as to become aware of restrictions or distortions of competition when they occur.