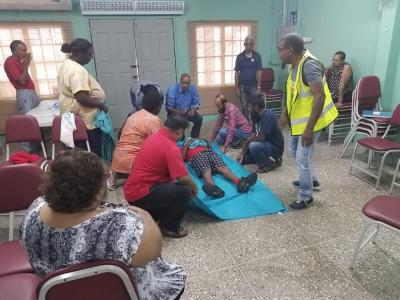 The CEO of the Office of Disaster Preparedness and Management (ODPM), Major General Rodney Smart and the Deputy Permanent Secretary of the Ministry of Rural Development and Local Government, Mr Raymond Seepaul, led a combined team of disaster managers to Piparo to meet residents and update them on response and evacuation plans in the event of an eruption.

The team visited the area on Friday 27th September 2019.

Today, Saturday 28th September 2019 at 1:00 p.m. in the Princes Town Community Centre, a Community Emergency Response Team would be established, along with the strengthening of the evacuation plan based on local knowledge of the area. Residents would also provide further input into the strategy for the evacuation of vulnerable persons within the community.

CEO of the ODPM, Major General Rodney Smart confirmed that the combined efforts of the Ministry of National Security and the Ministry of Rural Development and Local Government and all other state agencies would result in the improvement of the overall response and resilence of the Piparo Community.