EBC ready for Bye-elections as Returning Officers get Writs 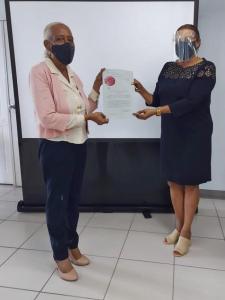 2020 continues to be a year of firsts as the Elections and Boundaries Commission (EBC) gears up for two, simultaneous elections, the Tobago House of Assembly Elections and the Local Government Bye-elections, both to be conducted on January 25, 2021.

Returning Officers for the Local Government Bye-elections received their writs from Mrs. Roslyn Khan Cummings, Member of the Commission, on Sunday 13th December, 2020. These Writs of Elections, which are issued by Her Excellency, Paula Mae Weekes, O.R.T.T., gives these Returning Officers the authority to conduct the upcoming elections on behalf of the EBC.

Local Government Bye-elections will be conducted in five (5) electoral districts as vacancies were created when these Councillors contested and won seats in the 2020 Parliamentary Elections.

The electoral districts in which these Bye-elections will be held are Arima Central, Cunupia, Hindustan/St. Mary’s, Hollywood and Morne Coco/Alyce Glen.