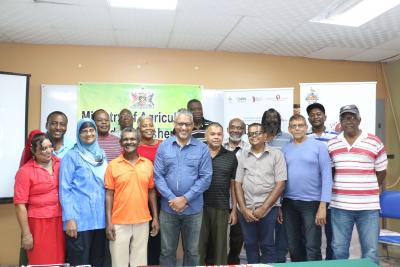 The Government of Trinidad and Tobago intends to look at the wording of the regulations relating to the grant of duty-free and VAT-free concessions to farmers, particularly those involved in agro-processing.

So said the Minister of Agriculture, Land and Fisheries, Senator the Honourable Clarence Rambharat at a Cocoa Farmers Outreach Meeting on Tuesday 31st July, 2018, held at the Rio Claro Demonstration Centre. The meeting was hosted by the Cocoa Research Centre (CRC) of the University of the West Indies (UWI) in St. Augustine as part of the IMPACTT project.

Minister Rambharat, who underscored the importance of the Ministry’s focus on productive farmers, assured that they will benefit from incentives available from the Ministry. “We will provide the training, land, technical support, some quality assurance and food safety support and give the appropriate incentives”, he said. The Minister also indicated that there were at present, some issues with the VAT and duty-free concessions, particularly as it pertained to equipment used in agro-processing, including fish processing.

This, he attributed to the language used in the existing regulations, which, according to him,  sometimes made it difficult for the Customs Division and the VAT Office to grant the Duty-free and VAT-free concessions respectively. He added that it is his responsibility to make the process simpler, which he intends to do soon with the support of the Ministry of Finance.

Minister Rambharat also urged the cocoa farmers to demonstrate preparedness, as the cocoa industry required a dedicated investment of both time and energy if the overall quality of cocoa is to be improved. He reminded farmers that cocoa production took time and that they should follow the due process and utilise the expertise currently available to them if they are to optimise benefits within its increasingly competitive business environment.

Meanwhile, Director of the CRC, Professor Path Umaharan, told the gathering that the cocoa industry would not grow if the individual farm units and farmers failed to become profitable. He indicated however, that through the IMPACTT (Improving Marketing and Production of Artisanal Cocoa Production from Trinidad and Tobago) Project, the CRC was intent on creating successful farm models across the country, where cocoa farms would not only become profitable, but allow those involved to lead a sustainable and dignified life in the developing markets.

The Cocoa Farmers Outreach meeting was the first in a series of meetings to be held in areas across the country by the CRC.