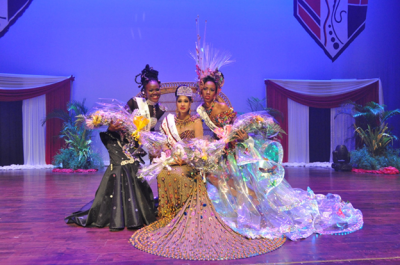 With performances which included African and East Indian-styled dances, songs and dramatic theatrical pieces, 35 young ladies from across Trinidad and Tobago commanded the stage at the Southern Academy for the Performing Arts (SAPA), vying for a spot in the Prime Minister’s Best Village Trophy Competition - Miss La Reine Rive Finals.

During the preliminary round of the competition, which was held on Saturday 18th May, 2019, the delegates sought to captivate the judges with their talent, self-expression and on-stage responses. Contestants had to score at least 70% to secure a place in the finals. Eight district winners were selected as well as seven other finalists based on order of merit. A total of 15 participants have advanced to the finals.

The crème de la crème take the Prime Minister’s Best Village Trophy Competition Finals stage on August 10th and 24th at the National Academy for the Performing Arts (NAPA), where 15 young ladies will bring their best, as they compete for the crown and title of Miss La Reine Rive.

The Prime Minister’s Best Village Trophy Competition falls under the purview of the Ministry of Community Development, Culture and the Arts. For more information and schedule updates visit cdca.gov.tt or the Ministry’s Facebook page.