Condolences on the passing of Senator the Honourable Franklin Khan 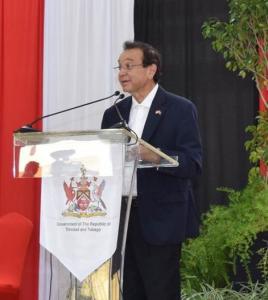 Senator Franklin Khan was a Petroleum Geologist by profession, having spent twenty years in the energy sector both locally and abroad in a wide range of positions both at the technical and managerial levels.

Senator Khan held a BSc Degree in Geology and Geography (1980) from the UWI (Mona) Jamaica, and an MBA (2007) from the Arthur Lok Jack Graduate School of Business, UWI (Trinidad).

Professionally, Senator Khan served as President of the Geological Society of Trinidad and Tobago on two occasions. He also served as Director of the Water and Sewage Authority (WASA) and as Chairman of National Petroleum Marketing Co. Ltd. (NPMC).

In August 2020, he was reappointed to the portfolio of Minister of Energy and Energy Industries for a second term, a position that he held up until the time of his passing.

During his tenure as the Minister of Energy and Energy Industries, Senator Khan accomplished a multitude of feats, for the benefit of the MEEI, and ultimately, the country. These accomplishments included the successful restructuring of Petrotrin.

In 2018, Minister Khan was an integral part of the GORTT’s Empowered Negotiating Team, which undertook negotiations with Shell and BP to address the issue of revenue leakage in the LNG sector.

Under Minister Khan’s leadership, the MEEI embarked on the first large-scale renewable energy project in the country.

On behalf of the MEEI, Mrs. Penelope Bradshaw-Niles, Acting Permanent Secretary and the Deputy Permanent Secretary, Mrs. Sandra Fraser would like to express sincere condolences to the family, friends and loved ones of Senator Khan. Our thoughts and prayers are with his family at this time.