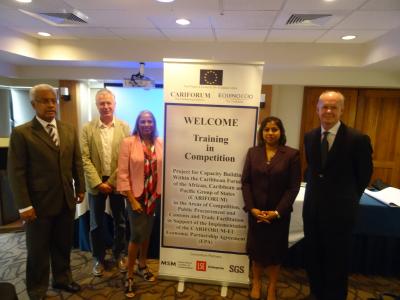 May 9, 2016: The Trinidad and Tobago Fair Trading Commission (TTFTC) in keeping with its objective to ‘be a watchdog for free and fair competition in the conduct of trade and business and a facilitator of innovation and development’ participated in a five (5) day training programme under the CARIFORUM-EU Capacity Building project on Competition on Monday 02 May- Friday 06 May, 2016 at Kapok Hotel.

In the Opening Ceremony, Dr. Ronald Ramkisson, Commissioner, Trinidad and Tobago Fair Trading Commission acknowledged the timeliness of the training; he said ‘this workshop comes at a particularly crucial time, given the importance of competition law and policy for sustainable economic development, especially during a time of economic slowdown. It is part of the Commission’s overall plan to educate the business and relevant professional communities about competition policy and its enforcement mechanisms’.

Mr. Ulrich Thiessen, Attache International Cooperation Officer, Delegation of the European Union to Trinidad and Tobago in his Remarks expressed pleasure in the hosting of the training workshop which he stated ‘supports the fulfilment of commitments under the EU Caribbean Economic Partnership Agreement 2008’. He said ‘the EUs interest is long term, knowing that better governance, competition, and trade and specialization will contribute to higher living standards in both regions’. Dr. Taimoon Stewart, Consultant in International Trade and Competition Law and Policy outlined the expectations and methodology of the training programme. Some of the areas the course covered included abuse of market dominance; the economics of competition; bid rigging in public procurement; anti-competitive agreements and merger control regulation.

The workshop consisted of a Level II training programme in competition and was a continuation of a Level 1 training held in February 2016, forms a part of the CARIFORUM-EU Capacity Building project within the Caribbean Forum of the African, Caribbean and, Pacific Group of States (CARIFORUM) in the area of Competition, Public Procurement and Customs and Trade Facilitation in support of the implementation of the CARIFORUM-EU Economic Partnership Agreement (EPA).