Community libraries to revive the art of reading 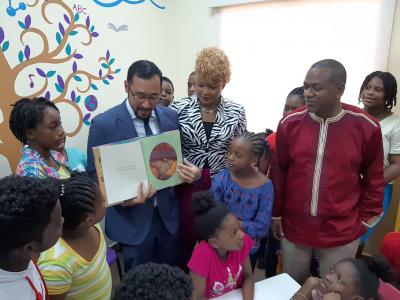 Minister of Communications the Honourable Stuart Young has thrown out a challenge to the older generation to motivate the nation’s children to read more books.

Minister Young, who is also Minister of National Security and Minister in the Office of the Prime Minister said reading books through the use of libraries provides another option for youths as a productive pastime.

Minister Young urged residents of the Barataria community and environs to use the library as a resource for research and widening their knowledge. He encouraged the older generation to motivate youth to read more books.

“Let’s try and drive our children back to reading the books, and drive them back to the opportunity of learning that books present to them, because for the older generation, before the advent of the internet, that was our source of information. Sitting down and getting lost in books really does broaden one’s mind.”

Minister Young said libraries will also be used as a tool in the rehabilitation of prisoners. He said the National Library and Information System Authority (NALIS) will be expanding its services to our prisons and correctional facilities.

He believes that Community libraries can help steer young people away from a life of crime.

“Persons make mistakes and in making mistakes it doesn’t mean that their lives should be lost forever. So, as the Minister of National Security as well as the Minister of Communications, one of the important initiatives I know I am going to achieve through the hard work of NALIS, is the achievement that our prison systems have proper functioning libraries to give those who are incarcerated, an opportunity that they deserve to broaden their thinking and their horizons and to utilize their time whilst incarcerated in a productive way.”

The Barataria Community Library is the third to be opened in NALIS’ Co-location Project. The others are located in Mt. Hope and Beetham. The project will also be expanded to other communities in Trinidad and Tobago as well as the prisons systems.

Minister Young thanked the Board of NALIS for making these community library projects a reality.