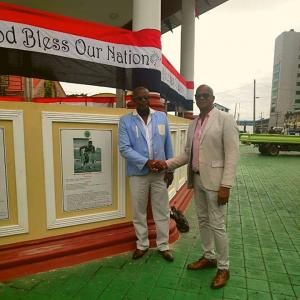 In 1976 Hasely Crawford made history being Trinidad and Tobago’s first Olympic gold medallist. 43 years later he was honoured by his hometown of San Fernando.

These plaques, which were unveiled ast Wednesday, stand celebrating him as one of Trinidad and Tobago’s sporting icons, along with our first Olympic medallist the late Rodney Wilkes.

In an interview, Crawford said there is no greater honour than to be recognised by your own.

“Since winning the Olympic gold medal, it is the first time I have been honoured in San Fernando. I was born in San Fernando, at 10 Sutton Street. I looked at my first television programme right here (on the bandstand) and I used to run around here. I am really excited to know I am honoured in my hometown.”

He has received the country’s highest honour, The Trinity Cross now known as the Order of the Republic of TT, for that his outstanding achievement at the 1976 Summer Olympic Games, Montreal. The National Stadium has been named after him and he has earned the title of Athlete of the Millennium (1900-2000).