From carat leaves and tapia to iconic structure 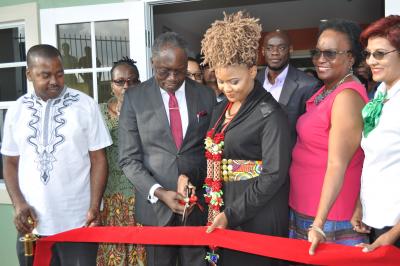 Bounded by the Arena River to the north, Mc Lean Trace to the south, Centeno to the east and Madras Village to the west, the central community of Las Lomas #2 received a very early Christmas gift with the formal opening of its new Community Centre on Saturday 2nd November 2019. Derived from the Spanish word “The Hills”, because of the many hills that can be seen throughout the community, Las Lomas was first inhabited by the Amerindians, mainly by the Tainos (Arawak). In 1498, the Spaniards took over the community and established a plantation system which was then taken over by the British in 1797. Las Lomas is later divided into three (3) communities - Las Lomas Nos. 1, 2 and 3 with the indentures calling Las Lomas #2, Nancoo Village after the first Indentured labourer to reside in the community. While it is widely known as Las Lomas #2 many of the older residents still refer to Las Lomas as Nancoo Village.

This rich history coloured what was a celebratory mood as the sweet songs of tassa music emanated from the new Las Lomas #2 Community Centre as the community welcomed all to the re-dedication ceremony for the new iconic Community Centre. Guests were entertained by the Standard 5 students of the Las Lomas #2 Government Primary School, Best Village performers who graced the stage with an East Indian dance, a calypsonian and a gospel artiste.

During her report, Mrs. Sandra Raj, Secretary of the Las Lomas #2 Village Council, expressed her gratitude for “this state of the art community centre which would be used for generations to come”. She said that the village council has already embarked on two initiatives to the benefit of the community and its environs. “The government has provided it for the people to improve themselves and every effort must be made to keep the building in pristine condition at all times. The centre can be deemed a ‘Pearl of Great Price’ and we must treat it as such.”

Member of Parliament (MP) Maxie Cuffie also expressed his gratitude to Dr. the Honourable Nyan Gadsby-Dolly, Minister of Community Development, Culture and the Arts for providing a long needed upgrade for the community. He said that “Las Lomas #2 has finally seen the light and we must give thanks to the ancestors who came before to set the way forward.” The MP also reminisced on the many meetings held with the residents in the once Carat leaves and Tapia structure and the conditions faced with bats flying during the meetings. He remarked that the Community Centre is one that we must truly be thankful for.

In her feature address, Dr. the Honourable Nyan Gadsby-Dolly said that, “This beautiful building must not only become an iconic structure in Las Lomas #2 community, but must house within its walls the legacy of what it was 73 years ago as carat leaves and tapia. 73 years ago, no one would have dreamed this lovely, modern structure would stand here”. Minister Gadsby-Dolly expressed the sentiment that, “This centre, this brick and mortar structure is a good starting point to re-engineer to re-energize your efforts at increasing the quality of life in your community”.

Minster Gadsby-Dolly acknowledged all the awardees and community pillars for their contributions to the Las Lomas #2 community and its environs and reminded them that a great vision is only realized through action. The five persons honoured for their service to the community were:

On Saturday 14th December the Indian Trail Community Centre is set to officially opened at a rededication ceremony.