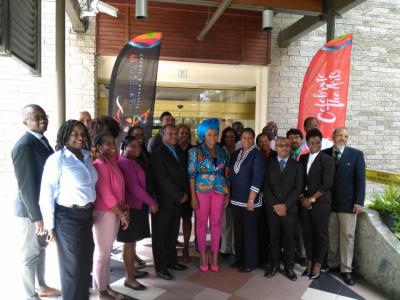 Members of the Regional Cultural Committee including Mr. Troy Mills, Chairman of the RCC (4th from left), Dr. the Honourable Nyan Gadsby-Dolly (5th from left), and Dr. Hilary Browne, Programme Manager for Culture of the CARICOM Secretariat (4th from right).

On Wednesday 27th March 2019, the 27th edition of the Regional Cultural Committee Annual Meeting was officially opened at the Hilton Trinidad and Conference Centre. Over the proceeding three days some of the region’s most culturally-acute minds discussed and charted a course forward on pertinent cultural matters impacting the Caribbean. These include an update from the Local CARIFESTA XIV Secretariat and the CARICOM Interim Festival Directorate on Trinidad and Tobago’s preparations for CARIFESTA XIV, the keenly-debated reparations to the Caribbean from former European colonizers, financing for the cultural sector, the benefits of economic partnership agreements for culture, and the Caribbean’s commemoration of The United Nation's International Decade for People of African Descent.

Dr. the Honourable Nyan Gadsby-Dolly, Minister of Community Development, Culture and the Arts delivered the feature address, confessing an enduring passion for CARIFESTA XIV. She illustrated how a reimagined CARIFESTA can increase cultural entrepreneurship and festival tourism in the region. Debut events such as a Youth Village, Community Festivals, Niche Events such as a Jazz show, Food and Rum Festival, Best Village Festival, and a Super Concert with regional headliners only serve to raise the profile of the region’s largest Arts Festival whilst demonstrating the potential for each to become stand-alone Festivals for the region. Dr. Gadsby-Dolly also asserted a positive view on the country’s current fiscal climate- “Trinidad and Tobago is currently experiencing a rigid fiscal constraint, yet the innovation and sheer volume of creative entrepreneurs emerging during this time is extraordinary. There has been a significant increase in the number of local markets for craft artisans, artists and culinary entrepreneurs throughout the year, with an active push towards environmental sustainable business practices”. She also lauded another new element to the Festival, the recently concluded Talent Search and Casting Call, which saw hundreds of amateur artistes across the country vie for an opportunity to participate in the Festival.

Dr. Hilary Brown, Programme Manager for Culture and Community Development at the CARICOM Secretariat also addressed attendees at the Opening. She spoke of the Committee’s ongoing efforts to pursue reparations for former European colonies, and of its advocacy role in developing the Cultural and Creative Industries Innovative Fund (CIIF). Like Minister Gadsby-Dolly, Dr. Brown also put a positive spin on the region’s economic situation, citing that the global GDP average for the cultural industry was 3%, however, countries such as Jamaica, Trinidad and Tobago, and St. Lucia had their cultural sectors contribute more than 4 % of their country’s respective GDP within recent times.

Also addressing attendees was Chairman of the Regional Cultural Committee, Mr. Troy Mills, who stated that the Caribbean’s tourism product can no longer be limited to the “sun, sand and sea” ideology. He reiterated the importance of marketing the region’s culture, and proposed several ideas which would be slated for discussion over the coming days. These include the establishment of a Regional Carnival Committee, a Carnival ‘island hop’, a National Culture Day for the region and improving travel between the islands.

The RCC Meeting concludes on Friday 29th March, 2019. This Meeting was preceded by the Interim Festival Directorate (IFD) Meeting, which was held from March 25th to 26th. The IFD participants conducted site visits to various CARIFESTA XIV venues on Tuesday 26th March, as part of their report on T&T’s state of readiness for CARIFESTA XIV.