Call for Applications for Mentoring by the Masters 2019 programme 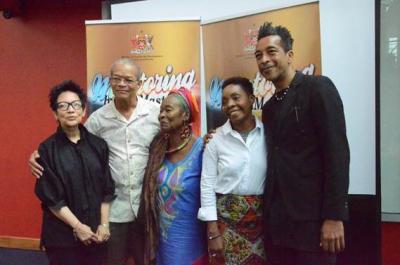 Often in life, wisdom emerges after one has endured strenuous and perhaps spirit-breaking ordeals. It is when we have figured out how to finally navigate this journey that the mind becomes calm; contented with newfound knowledge that will nurture its development. This is then transferred to the less experienced, creating more informed individuals and easing the path for future generations to come. This is the process of mentorship, often defined as “conferring wisdom unto others without the pain…"

This year, five extraordinary mentors in the cultural sphere: Gillian Bishop; Satnarine Balkaransingh; Nancy Herrera; Raymond Choo Kong, and Barbara Jenkins, have all stepped forward to share their journey through the Mentoring by the Masters Programme. The combined experience of these individuals in the cultural industry spans well over 100 years, and they have each laid crucial foundations in their respective areas of craft, dance, theatre and literary arts. Their journey to success was by no means straightforward; yet their commitment to their professions remained resolute.  These mentors will be imparting valuable knowledge and experience unto the programme’s new cohort of mentees.

Since its inception in 2012, the Mentoring by the Masters programme has seen over 550 persons benefit from mentoring workshops aimed at refining their creative skillsets, solidifying their business ethics, and absorbing the lessons learnt from their seasoned counterparts. It is one of the Ministry’s signature programmes centred on heritage preservation, and this year’s offerings promise to live up to the calibre of previous editions.

The application period for the 2019 edition will run from May 15th to 27th 2019, and forms are available on the Ministry’s website http://www.cdca.gov.tt/mentoring-by-the-masters/. Both students and amateurs in the creative industry are invited to submit their applications early, as space is limited. Interested persons can contact 225-4023 extensions 4058-4063.

Here are the profiles of the 2019 Mentors:

Nancy Herrera is an accomplished dancer who has been involved in every facet of dance in Trinidad. She is an Assistant Professor of Classical Ballet and Head of Dance at the Academy for the Performing Arts at the University of Trinidad and Tobago, and a senior teacher at the Caribbean School of Dancing. Herrera is a co-founder of Metamorphosis Dance Company, and she established the Metamorphosis Dance Foundation in 2013. Herrera also co-founded the Contemporary Dance Collective and the annual CoCo Dance Festival which showcases cutting edge contemporary dance choreography of local and international choreographers.

Barbara Jenkins is a multi-talented writer who has written material ranging from works of fiction, to Health and Family Life Education textbooks for secondary schools. Her short stories have won numerous local, regional and international awards, and are published in anthologies and journals. Barbara has developed and facilitated programmes in Business Writing and Communication for state and corporate clients, and she has also developed and presented workshops in fiction writing and memoir writing for The Arvon Foundation, UK, The Bocas Lit Fest, T&T and The Blue Flamingo Literary Festival, The Bahamas.

Raymond Choo Kong is an award winning producer, director, and actor who has been changing the landscape of Trinidad’s theatre through comedy for the past 40 years. He has accomplished this through Raymond Choo Kong Productions, a well-established theatre production house of which he founded. Choo Kong has received a total of 18 Cacique Awards from all categories, making him the holder of the most Cacique Awards. Choo Kong has directed large musicals such as ‘The Sound of Music’, ‘The King and I’, and ‘Mahalia: A Gospel Musical’, for First Instinct and JCS Entertainment. He has also worked on projects in Best Village, Commercial Theatre, Trinidad Theatre Workshop with Dereck Walcott, Films, Commercials, Band Launches and many more.

Gillian Bishop is an accomplished jeweller and designer whose work is held in private collections all over the world in countries such as North America, Canada, England, and Australia. In 1989 she co-founded The Signature Collection, a company which sells precious one of a kind jewelry. Bishop has created costume designs for many performing arts entities. She was the Senior Costume Design Consultant for the 1976 CARIFESTA Gala, and in 1999, she served as a judge for the costume segment of the Miss Universe Pageant held in Trinidad. Many major trophies and awards have been designed by Bishop, and she has been commissioned to design jewelry, gifts, and vestments for various world leaders and religious leaders. She will be mentoring participants in the area of Design.