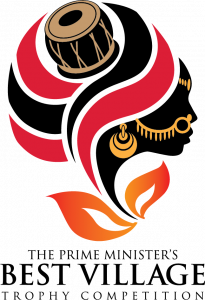 The Prime Minister’s Best Village Trophy Competition launched its new logo in May for the 2019 Competition. The new logo embodies the new identity and spirit of the competition and according to Dr. the Honourable Nyan Gadsby-Dolly, Minister of Community Development, Culture and the Arts, “This is an exciting change for us and a strategic move for the competition as since 1963, the Prime Minister’s Best Village Trophy Competition has been a main incubator for this country’s finest creative talents”.

Minister Gadsby-Dolly continued “The competition has built a strong reputation for promoting our nation’s culture and over the last two years, the Ministry of Community Development, Culture and the Arts has been reshaping the programme to enable the competition to unleash its fullest potential going into the future”.

In 2017, the Best Village competition introduced its Folk Theatre Season giving the top performers an opportunity to perform on stage once again to national audiences. In 2018, the introduction of the Folk Arts Festival incorporated not only the top performers in the Folk Theatre competition but also the Folk Presentations, setting the stage for a Best of Best Village Show. These changes were further enhanced by an increase in the prize money for the various categories.

The new logo came out of a national competition and was ultimately selected by the Best Village Community. The new logo effectively communicates and represents the ideas behind the competition and conveys a sense of pride in the heritage and legacy of the longest running government, community based programme. Minister Gadsby-Dolly endorsed the new logo and saw this as the perfect time to launch it; she reiterated that, “as Trinidad and Tobago gets ready to host CARIFESTA, the Best Village Community will play an integral role in showcasing the nascent talent and culture of Trinidad and Tobago.”