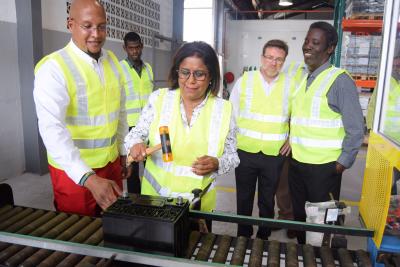 Local automotive battery manufacturer, Lange Trinidad Limited (LTL) has made a TT$50 million dollar investment into a state of the art, fully automated, high-tech digital production facility. The company has penetrated twelve markets across Latin America and the Caribbean and was commended by Trade and Industry Minister, Senator the Honourable Paula Gopee-Scoon for this milestone.

Speaking at a tour of its newest factory, located at the O’meara Industrial Estate in Arima on Tuesday 28 May, 2019, Minister Gopee-Scoon said “the Government is quite pleased with this substantial investment into the manufacturing sector with the implementation of this high value manufacturing facility, you are ready to compete globally”. This investment, she said, demonstrates the application of technology in manufacturing, which is required for local firms to succeed internationally. Describing the company’s investment as a diversified process in the manufacturing sector, Minister Gopee-Scoon expressed satisfaction with their development and the confidence in the economy of Trinidad and Tobago. She also noted that the company has transformed from being importers to exporters and from foreign exchange seekers to net earners of foreign exchange. The Minister Gopee-Scoon also committed to continued support for the growth and development of the manufacturing sector by the Ministry of Trade and Industry and its agencies.

Mr. Ken Costa, Chairman, LTL Manufacturing Limited noted that its state of the art, automotive production line has the capacity to be a major player in CARICOM’s extra-regional markets and to be a net earner of foreign exchange. Mr. Christopher Skinner, Chief Executive Officer LTL, provided an overview of the company’s journey which began in 2014. He said “in order to protect our 30 year investment in our “Track” battery brand there was a need to invest in equipment to produce a quality product”. He added that the company is proud to be exporting to regional markets including South America with plans to explore further markets. Mr. Skinner thanked all stakeholders for their support and gave LTL’s commitment to playing its part in the diversification agenda of Trinidad and Tobago.

LTL Manufacturing, a family run venture, manufactures car batteries for export to CARICOM and the Latin American markets. It is a subsidiary of Lange Trinidad Limited which provides top quality lubricants, automotive batteries and spare parts. The success of this company redounds to the domestic economy through employment and the positive spin-off effects throughout vertical and horizontal supply chains. Several of its inputs in the manufacturing process are derived locally, including those from suppliers, local contractors and distributors.