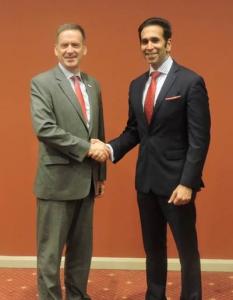 Mr. Mark Green, the Administrator of United States Agency for International Development (USAID) is greeted by the Honourable Faris Al-Rawi, M.P., Attorney General and Minister of Legal Affairs of Trinidad and Tobago.

The Republic of Trinidad and Tobago was officially visited by Mr. Mark Green, the Administrator of United States Agency for International Development (USAID) over the period May 9th to May 12th 2019.

The purpose of this official visit was to discuss the ongoing cooperation between our two nations. Together with his team, Mr. Green visited:

Mr. Green and his delegation also benefitted from a detailed tour of the Children’s Court in Port of Spain, (USAID contributed significant funding to this development as part of the Trinidad and Tobago’s Juvenile Court Project). Consequently, Mr. Green also met with the Hon. Chief Justice Ivor Archie. It was noted that the Judiciary and the Ministry of the Attorney General and Legal Affairs worked in collaboration with the USAID on this ground-breaking project.

On May 10th 2019, Mr. Green met specifically with the Honourable Faris Al-Rawi Attorney General and Minister of Legal Affairs at the Parliament of Trinidad and  Tobago. This meeting comprised of all the parties listed below. It was meant to engage, express gratitude and further discuss ways in which USAID could continue to assist Trinidad and Tobago via funding and/or voiced support for pending and/or ongoing projects, or future ventures.

The meeting was rather rewarding as Mr. Green thanked the Honourable Attorney General and his Government for facilitating the progress of the venture re: the Children’s Court and for ensuring that opportunity did not go to waste. The Honourable Attorney General also expressed his deepest gratitude to the USAID for their financial backing and diligence in ensuring that the project lacked nothing from its commencement to its completion.

At the end of the discussions, both sides expressed their earnest gratitude for the cordial relationship shared between their nations and governments.

Parties who attended meeting with the Honourable Attorney General: