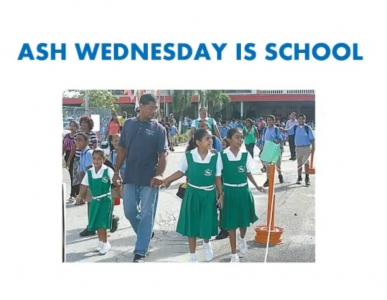 The Honourable Anthony Garcia, Minister of Education thanks the thousands of teachers who came out to work today and parents who heeded to the call of “Ash Wednesday is school”.

Attendance reports collected by School Supervisors today indicate a marginal increase in the attendance of students on Ash Wednesday (14th February, 2018) over the corresponding period in 2017. At the secondary level the attendance improved from 18.8% to 19.7% while at the primary level there was an improvement from 25.6% to 28.0%.

* All SDMS and SWAHA schools were granted a religious holiday on Wednesday 14th February, 2018 in observance of Maha Shiva Raatri.

The consistent effort to remind parents and guardians that “Ash Wednesday is school” has gained some traction as the Ministry has recorded an incremental increase in attendance during the week following Carnival.

Since Minister Garcia took office, student’s attendance has improved by almost 10% at the primary level while at the secondary level has increased by 3.2%, as seen in the table below.

“Contrary to what many may think, reports confirmed the consistency of our teachers coming out to work on Ash Wednesday. Unfortunately, too many parents do not send their children to school. We need to change this to send the right message to our children,” said Minister Garcia.

Parents and guardians are urged to send their children to school on Thursday 15th and Friday 16th February, 2018 in order to take advantage of the educational opportunities available to them.