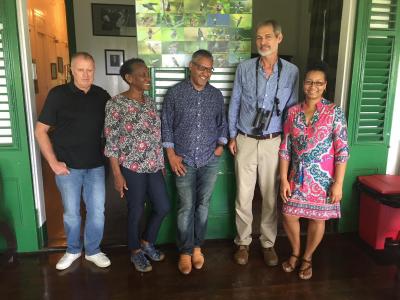 In an effort to market Trinidad as a tourist destination for bird enthusiasts, Senator the Honourable Clarence Rambharat, Minister of Agriculture, Land and Fisheries, met with the Board and Management of the Asa Wright Nature Centre (AWNC) in Arima on Sunday 22nd July, 2018, to address a number of issues relative the conservation and protection of migratory species. Among these was the longstanding issue in which access to a renowned habitat for birds - the Aripo Livestock Station - was restricted indefinitely, depriving both foreign and local guests of the AWNC from an exhilarating birdwatching experience, for a number of years.

Such was a challenge Minister Rambharat was committed to resolving as the management of the Aripo Livestock Station, fell within his purview. He explained that access to the facility had long been restricted following the outbreak of the foot and mouth disease a few years ago and had inadvertently, not been lifted despite the “disappearance of the risk”. The Minister said at the meeting: “I am here to inform the AWNC that access to the Aripo Livestock Station will resume so as their representatives embark on their upcoming marketing campaign in the United Kingdom, they can now tell prospective tour operators and the many guests of their Centre, that Aripo is once again, open for business.”

He noted that the AWNC was preparing to join nature resorts from over eighty-eight (88) countries for an annual promotional exercise, in anticipation of the November-May high season and that among the planned action of local birders, was the proposal to ratify the Convention on Migratory Species and to make further changes to the Conservation of Wildlife Regulations as it related to migratory birds. The revelations came mere days ahead of Thursday’s (July 26th, 2018) ceremony at the Caroni Bird Sanctuary where the Scarlet Ibis will officially be designated, an environmentally sensitive species (ESS), which would see an increase in the legislative protection afforded to the National Bird, including a $100,000 fine for poaching.

In touching on the issue of hunting, the Minister alluded to a number of suggestions currently before him – a few of which he would like to implement “in time for the next season”. He said the long term decisions relative to possible extensions and restrictions to the period and territorial zoning in respect to particular species of animals cannot be made at this time. He added that the “decision on what should and should not be hunted” depended primarily on a data collection exercise which was currently being executed by the Environmental Management Authority (EMA) and the University of the West Indies (UWI), following which the public will be engaged by way of consultation.

Additionally, Minister Rambharat said that he was against “the proliferation of commercial advertising of wild meat”, which he believed, was being “fuelled by illegal imports from Venezuela” as he sought to empower those communities and individuals who relied on the activity “for economic value to their households.”